Poker Player Has His Ear Bitten Off After Bar Brawl 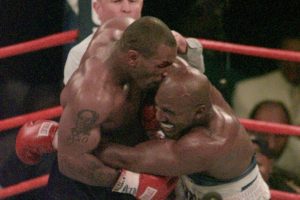 Robert Reed had part of his ear bitten off after an argument at a local poker tournament in Ipswich. (Image: Jeff Haynes/AFP Photo)

Stories of poker players being on the wrong end of an assault with a gun or a set of fists are, unfortunately, not all that uncommon; however, very rarely do we have to report on a Mike Tyson-style attack.

For those of you who don’t know, Tyson was not only one of the most fearsome boxers of all time, but he once took a piece of Evander Holyfield’s ear off in a fight.

With his punches hitting thin air, a frustrated Tyson decided to clinch with Holyfield and proceeded to bite his ear not once but twice.

That famous incident not only sent shockwaves through the boxing world, but it appears to have been the inspiration behind a post-poker tournament attack in the UK.

After sitting down to play a poker tournament in the Kirby Street Conservative Club, Ipswich, Robert Reed found himself in a confrontation with an intoxicated Nicholas Salisbury.

Despite trying to concentrate on the task and hand (namely the poker tournament), Reed was constantly distracted by Salisbury and decided to challenge the drunk.

Once the poker tournament had finished, Reed decided to head outside to smoke a cigarette. It’s at this point that Salisbury attacked Reed, punching him in the face and knocking him to the ground.

After Reed staggered to his feet, Salisbury caught him in a headlock and took a chunk out of his ear.

Following Salisbury’s arrest he was required to appear at Ipswich Crown Court and, earlier this week, he was sentenced to three years in prison.

For his part, Salisbury admitted grievous bodily harm; however, the judge was still forced to hand down a custodial sentence.

In summarizing the case, Judge Rupert Overbury commented on the violent nature of the incident and urged Salisbury to consider his drinking habits in the future.

“Unfortunately when you have too much to drink you do behave aggressively. Your attack on Mr. Reed was unprovoked and extremely violent and every time he looks in the mirror he will be reminded of that evening,” said Overbury.

Following the verdict, Salisbury’s legal representative, Nicola May, said that her client was sorry for any injuries caused.

As for Reed, he was able to have the piece of ear grafted back on at a local hospital and, other than a scare, he’s now fully healed.

Some of this stuff just can’t be made up.

If they were in the U.S.A. Salsburg wouldn’t be gettin’ an earful…. instead Reed’s ear would still be intact as surely he’d have easy access to a handgun!