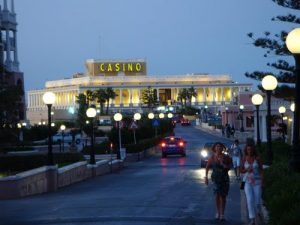 Poker pro tries to replenish his bankroll by stealing €10,000 worth of dresses. (Image: mixer95)

The influx of poker players into Malta over the last few years seems to have had a negative impact on at least one grinder according to a recent report by Malta Toda.

Despite being a small island, Malta is now home to some of the industry’s leading poker operators and displaced players who have been forced to leave their homelands in order to continue playing online.

No Easy Games in Malta

This recent association with the poker community has made Malta a tough place to grind over the last few years and that’s something one Serbian grinder found out to his cost this month.

After sitting down to compete against some of Malta’s finest, Vladimir Ivljanin found out that the tiny island is actually full of sharks.

While he might have thought he was in for an easy ride, the Serbian quickly realized he was out of his depth after his bankroll had disappeared within a few hours of grinding.

Distraught that he’d lost all of his money lost and aware his wife would be more than a little upset when he got home, Ivljanin took drastic steps to recoup his losses and appease his partner by stealing three dresses.

Caught on CCTV breaking into a Hugo Boss shop in Malta’s St. Julians shopping quarter, the man was seen stealing three Bluemarine dresses with a combined value of €10,000. When questioned by local police officers, the man explained that he’d taken the dresses for his wife as compensation for losing all his money player poker.

In his defense, Ivljanin’s legal team argued that their client was trying to return the dresses after he had a “change of heart.” Regardless of his subsequent regret, the judge ruling on the case decided to impose a 16-month prison sentence on the poor poker player.

Fortunately, however, thanks to his apparent remorse, the judge suspended the sentence for three years which meant Ivljanin was able to avoid being put in prison.

Although the landscape is ever changing, Malta has welcomed a number of high profile grinders over the past few years.

Forced to move away from countries such as the US so that they could continue playing online, the following pros have contributed to overall skill level increase on the island.

Despite many players moving on to pastures new, the footprint left by some of the game’s finest has made Malta a veritable haven for poker in recent years.

In addition to the likes of Isaac Haxton and Justin Bonomo gracing the Maltese shores, other influential figures in the community, such as Alex Dreyfus and the GPI, have also found their way to the budding poker island.