Self-proclaimed poker star and philanthropist Beth Shak is being followed, and not in the way an Instagram celebutante would want, either. And after receiving an ominous message, according to the New York Post’s Page Six gossip column, to “make the most of every day you breathe the air above ground,” the 47-year-old has hightailed it out of Manhattan. 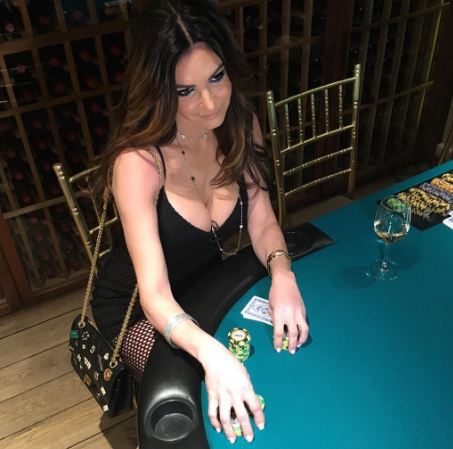 Known for her somewhat seductive outfits, both at the poker table and on her own website, Beth Shak is now undercover and in fear for safety, after a major iCloud hack that included theft of some topless photos. (Image: dailyentertainmentnews.com)

Shak, who is hedge fund manager Dan Shak’s ex and currently going through a divorce from her second husband, Fox News Senior Correspondent Rick Leventhal, told authorities she was also being followed, and that all her social media accounts (she has 18,300 Instagram followers) had been broken into, with even her dog’s Instagram account not being spared.

Understandably rattled, Shak has brought in her own cyber security experts, lawyered up, and contacted all of her social media presences, including Twitter, Facebook, Instagram, and even Google.

To make matters worse, Shak’s bank account, cell phone, and email were also hacked by the unidentified cyber-criminal. The latter was able to access all her personal accounts and change her passwords.

The frightening incidents come just as Shak is going through a heated divorce with Leventhal. The couple married in June 2016, but decided to call it quits in April, after just nine months.

Coincidentally, the cyber-hacking began around the time she filed for divorce, in early April. It’s clear she’s being targeted, but no one other than the criminals know the reason. Leventhal has denied any involvement.

“I have no interest in following her or accessing any of her accounts. All I’ve wanted since she filed for divorce is a smooth, amicable resolution. I have no idea who might want to hack her or why,” Leventhal said of the cyber-crime.

The hackers gained access to her Wells Fargo bank account, twice changing the password and viewing her balance, but oddly, taking no money. Topless photos reportedly hacked into don’t appear to have been posted anywhere, at least not yet, nor has any ransom been requested.

The well-funded divorcée posted a Twitter message on Sunday, asking for anyone with info that could lead to the arrest of the person or people involved to contact her attorney, George Bochetto. A $25,000 reward has been offered for their apprehension.

It’s never a good time of year to get hacked. But, for someone like Shak, it’s unfortunate she has to go through this during the World Series of Poker. She said Monday on Twitter that she is “still hoping to make it there this year.”

Her high-profile marriage to high-roller Dan Shak ended in 2009. Following the divorce, Dan filed a lawsuit, hoping to receive half of Beth’s famous $1 million shoe collection. The civil suit was eventually dropped.

Shak subsequently gained recognition when she appeared on reality TV shows, such as Millionaire Matchmaker, and has owned a private vintage designer clothing business for a decade. She is currently working on creating a custom-designed poker chip set company.