It’s the new golf: poker networking for entrepreneurs who want to make the all-important business connections for venture capital and more. Start-ups in Singapore are starting to use poker as a way to increase their business contacts and investments, according to Asian high-tech news site Vulcan Post. 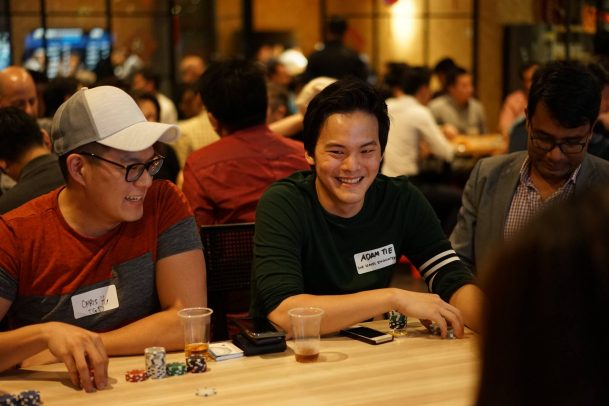 Tech publication Vulcan Post showed the power of poker networking with an event bringing Singapore entrepreneurs and potential VC funding together at the felt. But can the former survive the latter’s bankrolls? (Image: Vulcan Post/Facebook)

Picking up on the recent trend among tech companies and entrepreneurs in the region, the tech-based publication wanted to see why poker has entered this sacred space. After agreeing that poker has proven itself to be a successful networking tool in the past, the team at Vulcan Post organized an event.

Part fun, part social experiment, and part legitimate networking event, the February 10 tournament proved to be a big success. Although there was no money up for grabs, the pictures appear to show at least nine active tables, which would suggest close to 100 aspiring businessmen and women joined the action.

As part of the evening, players had to have business cards with them at the table and conversations about investment interests and mutually beneficial skills were encouraged. Overall, the tournament lasted for around two winners and the attendees were able to “enjoy more than a game of poker,” according to the VP.

The genesis of the recent poker start-up event in Singapore came from Silicon Valley’s use of the game. Back in 2012, Bloomberg compiled a video report on the growing trend of poker among Silicon Valley workers, which made it into the headlines.

Focusing on some of the amateur players, the report emphasized how tech experts are naturally drawn to poker, because it speaks to their desire to solve problems in a rational way. In fact, one player, Ian Chan, not only explained how he’d made some deep runs at the WSOP, but how poker was the perfect place to meet people in the industry.

“You end up with the scenario where someone will say: you play poker, you’ve got to meet my buddy at Yelp or my buddy at Google,” said Chan.

The links between the skills needed to play poker and survive in the world of start-ups have clearly spread to other parts of the world. As countries like Singapore look to build their own equivalent to Silicon Valley, many entrepreneurs are turning to poker as a way to increase their business networks.

Unfortunately for existing players, these players aren’t necessarily the type of newbie you’d want at the table. As outlined in an article on Silicon Valley poker players by Business Insider in 2014, everyone from investor and casino owner Carl Icahn to 2012 WSOP Main Event third place finisher David Einhorn were all Silicon Valley poker alumni.

So, while poker is once again proving it’s as social as it is cerebral, the latest round of players taking an interest in the game might not be so great for a start-up’s bankroll.