Is poker in India ready to take hold? One major tournament operator is betting on it. And so are some of the country’s top pros. 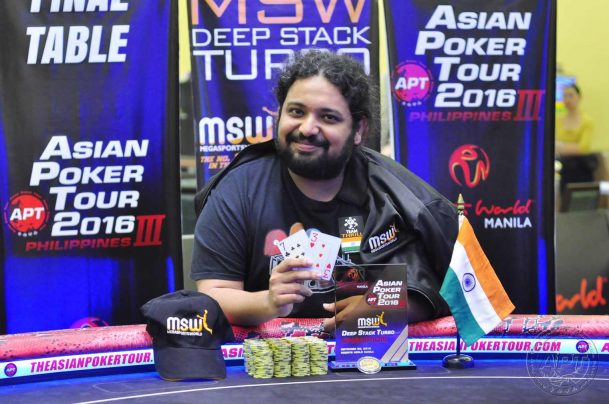 In September 2016, Dhava Mudgal took down the MegaSportsWorld Deep Stack Turbo for $2,970. While it might seem like a small potatoes cash to Western audiences, the game is starting to take off big-time in India. (Image: theasianpokertour.com)

When it comes to poker players from India (the second-largest country in the world with 1.31 billion residents), Nipun Java has established himself atop the all-time money list, with nearly $1.9 million in earnings.

While no other Indian contender has seven-figures earnings from the game, plenty are in the six-figure club, including Dhava Mudgal. He currently sits 11th on India’s all-time money list, with $190,223 dating back to 2010. That includes a career-best $43,245 for finishing fourth in the 2015 Macau Poker Cup.

It was also at that stop that he and countryman Akash Malik took down the Team Event for $6,328 apiece.

“The Indian poker scene is growing at a phenomenal rate despite obstacles,” Mudgal, a former editor-in-chief of CardPlayer India, told the Daily Pioneer, the country’s premier English-language news site. “If our government can remove some of the draconian laws and restrictions, especially the 30 percent tax we have to pay on the winning amount, it would definitely mushroom into a huge movement.”

Right now, poker is unwelcome in most of India. That’s because it’s largely considered a game of chance, and gambling is not only frowned upon, but illegal in most jurisdictions. However, there’s a push from players and the Indian Poker Association to get the game reclassified as one of skill. Just this month, the High Court in the Western state of Gujarat asked for clarification on the matter from government officials.

The spotlight on poker in India has grown, thanks to the launch of the Poker Sports League and popular Indian MTV host Rannvijay Singha signing with an online site.

“I’m surrounded by so many fantastic players, and we all work together in a fairly close-knit circuit,” said Mudgal, who was introduced to the game eight years ago when friends, who had studied at American universities, brought the game back home.

“There are some fantastic poker players in this country, but Samay Parikh and Aditya Agarwal are the original heroes. The emerging talent, Vidwath Shetty, has a noble table presence and the results are speaking in favor of him.”

The excitement surrounding poker in India isn’t limited to just players. One week ago, the World Poker Tour (WPT) further expanded its partnership with Adda52.com, India’s largest online poker website, by announcing both the first-ever WPTDeepStacks India and a WPT India Player of the Year award.

The $1,000 buy-in DeepStacks Main Event, which will mark the first time a major poker tour has hosted an event in India, will take place November 7-13 at the Deltin Royale Casino in Goa, one of the few places in India where gaming is prevalent, albeit on offshore gaming vessels.

Two other Deltin Poker Tour Goa events will qualify for the aforementioned POY race, which will see the winner take home $5,000 in tournament buy-in credits.

“With a burgeoning poker community in a country with a population of more than 1.3 billion, India is one of the most important territories in the global poker landscape,” said the WPT’S Angelica Hael, VP of global tour management.

India has the population required for a poker boom, but for it to take off, certain laws and perceptions need to change. Thanks to the efforts of players like Mudgal and entities like the WPT, such changes are on the horizon.