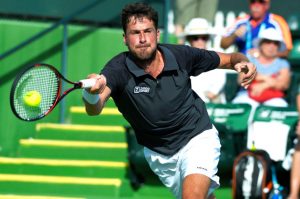 Mark De Jong, the coach of tennis star Robin Haase (pictured), is in jail on charges of murdering a millionaire businessman in the Netherlands over an alleged poker debt. (Image New York Post)

A huge poker debt is, according to police, the cause of a high-profile murder in the Netherlands, but the person indebted is the one locked up in jail. Mark De Jong, the coach of Dutch tennis star Robin Haase (59th ranked player in the world), allegedly murdered Koen Everink.

De Jong was arrested in the Netherlands where the crime took place immediately after arriving from a tennis match in the United States. His arrest sent shockwaves through the tennis world. The coach was well-known and respected on tennis tours.

Everink’s daughter found him stabbed to death in his home. The millionaire businessman and professional tennis player allegedly had shipped De Jong 80 thousand euros to help him pay off his gambling debts.

Police allege the debt was the driving force in this murder. In most similar instances, the person indebted ends up being the victim, but not in this case. It is unclear specifically why the tennis coach allegedly committed murder, but those close to the situation have suggested Everink wanted the money back quickly and had threatened to expose De Jong’s gambling problems publicly.

Those familiar with the tennis coach say he wasn’t a skilled poker player but would frequently play online. According to some poker players, he was a consistent loser at the online poker tables.

This Comes at a Weird Time

Paying off poker debts has been a big issue around the poker community recently. Some of the game’s biggest stars have publicly outed certain players for failing to pay off a debt.

Phil “OMGClayAiken” Galfond started the fad by calling out another high stakes player Samuel Touil for failing to pay him back the $250,000 he loaned him. Galfond claims Touil continued to play in high stakes games with an open debt.

The online poker star wrote an op-ed asking other poker players to speak out against players such as Touil. He claims he has yet to receive any money, not even a payment plan.

This had led others to lash out publicly about similar behavior. Shaun Deeb dropped a bombshell when he outed one of poker’s favorite stars, Eli Elezra, for failing to pay him back a large sum of money. Elezra has since informed Deeb he will make payments.

The aforementioned murder in the Netherlands happened just a few weeks following the above poker star’s public outcry to stop the scammers. Fortunately, the outcome of Galfond and Deeb’s situations haven’t been as tragic.

Many poker players don’t have self-funded bankrolls. It isn’t uncommon for even the most skilled players to seek a backer.

Backers typically receive a percentage of their “horse’s” profits at the poker table. But this can lead to disputes over debts. In the case of Mark De Jong, the poker community has learned to be careful who you loan money to.

What an idiot. Hopefully he gets the maximum sentence. Idiot should of started at the micros takes before playing with the big boys. Gambling degenerate.