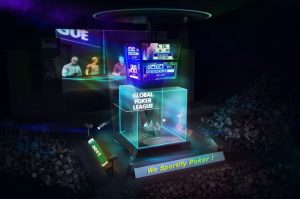 An artist’s rendering of “The Cube,” which will form the centerpiece of GPL finals. Players will supposedly be unable to see or hear anything outside of its confines, allowing for real-time hole card viewing by the Poker Central audience. (Image: pokernews.com)

The news comes shortly after the official announcement of the full list of franchises and team managers that will comprise the league.

TV coverage represents the next phase of Dreyfus’ grand plan to drag poker kicking and screaming towards a hipper and trendier presentation style.

Dreyfus has spoken at length of his mission to “sportify” poker, and has warned the game must reinvent itself if it is to revitalize its fortunes.

His GPL borrows its franchise system from the major US sports leagues, and has been inspired by the rise of esports as a way of presenting itself as a spectacle that might one day fill arenas.

GPL final tables will take place inside “The Cube,” a portable, 20-foot, one-way soundproof glass case. Live spectators will be able to view hole cards and live data in real time via a projection from the top of the structure, offering spectators the “first-ever immersive poker event in the world,” according to a recent presser.

Word is that no phones are allowed in the booth, and presumably players cannot see or hear outside of the cube, which is what is allowing for the real-time hole card views, compared to WSOP’s 30-minute delay during the Main Event’s “live” November Nine broadcast on ESPN.

Call us cynics, but we can see poker players finding a way around this. Overs/unders?

Taking Poker to the Masses

Dreyfus has vowed to attract mainstream sponsorship and media to the league. To that end, he has already signed a media deal with USA TODAY, the third-biggest selling newspaper in the US.

A partnership with a network like NBC would have been the Holy Grail for the league, rather than a dedicated poker channel like Poker Central, which caters to those who are already poker fans, but perhaps that will come in time.

However, Poker Central has agreed to air matches in primetime slots, rather than squirrel them away late at night, as a mainstream channel would more likely do. Unless it’s ESPN, of course.

Maybe the sports network has a non-compete clause with WSOP precluding such a marriage with any other poker entity; sadly, they do not let us into their contract negotiations, so we can only guess at such things.

“Both Poker Central and GPL were both created for the same reason:” said Dreyfus in a press release, “to take poker to the masses and to make it as popular as any other professional sport. PokerCentral will help GPL connect to fans worldwide.”

Clint Stinchcomb, CEO of Poker Central, praised the GPL’s “exciting approach to poker,” as well as its “innovations, technology and staging.”

As announced last week, 12 franchise teams of five players each, representing major cities all over the world, will operate in two separate conferences.

Three players from each team will be chosen for each match, with two selected as “wild cards.”

The league will comprise 12 weeks of matches, played live and online, followed by playoffs and a championship, to be held in October in “a leading sports arena in United States.”

Team selection is due to begin on February 25th in Los Angeles.