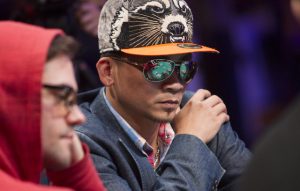 Did the use of poker bots contribute to Qui Nguyen’s surprising WSOP Main Event title?

No, not the kind of poker bots some cheaters have been found to use on online poker sites.

We’re talking about bots that help a player better understand the game of poker.

Blay is the man behind the website AdvancedPokerTraining.com, a website that, as you’ve probably guessed, provides poker training.

The website claims to help get players on a quick path from “average” to “world-class” with the help of computer training simulations. Nguyen became interested in the training website while preparing for the final table. He contacted Blay in search of a coach.

Prior to being contacted by Nguyen, Blay ran simulations based on information he knew about the November Nine participants to project a winner at the final table. The bots all came to the same conclusion that Nguyen would win. And they were right.

In case you weren’t paying attention, Qui Nguyen wore more than a goofy hat. He also had on a large Advanced Poker Training patch.

After receiving coaching from Blay, he had to show some love for the company that helped him become world champion. We don’t have details on how much Nguyen paid for coaching or if Blay received a portion of his winnings.

What we do know is Nguyen, prior to the Main Event, had very little tournament experience and no major tournament cashes. After the final table, he went from a $50,000 career winner to an $8 million first place prize. Was his poker coach responsible?

“I want to thank Steve Blay and Advanced Poker Training for their help and support before and during the event,” he said after winning the world’s most prestigious poker tournament.

As has been tradition, many players who make the November Nine seek the assistance of a poker coach. Nguyen’s heads-up opponent, Gordon Vayo, hired Tom Marchese to prepare him for the most important final table of his life.

Many November Niners have been inexperienced in major tournaments. Therefore, with a three-month break to prepare, the seek help from experienced pros. Or, in Nguyen’s case, a computer bot.

Other poker pros such as Phil Hellmuth have coached November Niners. With so much money and fame on the line, being prepared is crucial.

For the record, I never received and COAHING from anyone or hires anyone period!! Furthermore, no one stake me nor receive anything from me money wise.
APT Steve blay was only a sponsor for the main event for 3 day contract all they provided to me was the information on the bots that he created on the other players and provided information on the hands during the tournament but at NO times did he provide any coaching whatsoever. However, APT after running numerous sims their computer did picked me to win