Playtech, the world’s largest online gambling software company, continues to become more profitable. During the first half of 2016, the business raked in nearly $379 million. That’s an increase of approximately 18 percent, compared to the same time period a year ago. 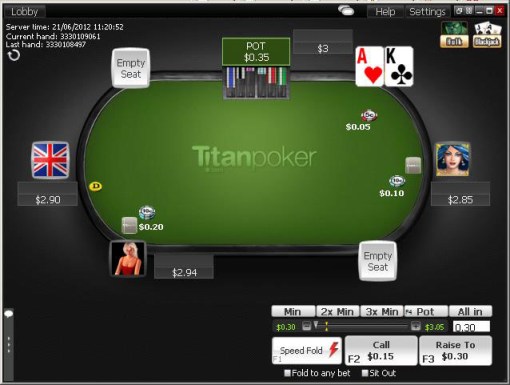 Playtech saw increased revenues during H1 2016, but not because of its online poker sites, such as Titan Poker.  (Image: titanpoker.com)

Shareholders will be the ones reaping the rewards of this sizable monetary influx. The company has announced it will give a special $168 million dividend to its shareholders.

Playtech’s online poker business, however, played no role in the increased revenue. In fact, had the company’s 25-plus poker sites performed as well as they did in H1 2015, perhaps the shareholders would receive an even larger reward.

Online poker revenues during H1 were down 16 percent from last year. PokerStars, owned by Amaya Inc., controls more than 75 of the entire global internet poker market. That makes it difficult for other sites to rake in the dough.

Playtech creates the software for poker sites such as Titan Poker, Betfair, bet365, William Hill, and Paddy Power Poker. None of those sites are competitive with PokerStars, or even with 888poker.

During H1 2015, Playtech’s internet poker revenues were at more than $6.7 million. This year, just over $5.6 million of the company’s revenue came from poker. Bingo was the only other service Playtech provides that saw a year-to-year decrease (11 percent).

Playtech may be disappointed in the performance from its bingo and poker businesses. But it certainly isn’t upset with the financials from H1 on the casino and sports betting side of the show.

Casino games, which includes blackjack, slots, and roulette, dwarf online poker revenues at most gaming companies these days. At Playtech, the casino side is even more valuable to the business now.

During H1 2016, the online gambling giant brought in just a shade under $200 million from casino games. That’s a massive increase of 19 percent year-over-year.

One of the Originals

Many of the original online gambling businesses from the late 1990s are now defunct. But not Playtech. This company has been around since 1999, creating software for dozens of online casinos.

Earlier this year, the company was rumored to be interested in joining Amaya’s then CEO David Baazov in taking over the company. That never materialized, and Baazov has since officially stepped down from his role, after facing accusations of insider trading from Quebec’s AMF.

Playtech doesn’t need Amaya, though. The business has been booming for years and, as the evidence above suggests, continues to improve. But having a stake in the company that owns PokerStars would certainly help its online poker business.