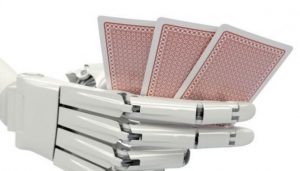 New player assistance software has been deemed acceptable by PokerStars but many players feel it crosses the line. (Image: yourhandsucks.com)

Players within the high-stakes heads up “community” are demanding that PokerStars ban controversial player assistance software that they say can turn good players into world-beaters.

The Two Plus Two forums have been buzzing with indignation this week, after the controversial software was exposed by HUSNG.com.

It’s understood that the program has been built by London-based player “skier_5,” who uses it freely on the high stakes heads-up games at PokerStars.

It’s also used by at least two others “allingirl777” and “freechdogg,” possibly in return for a share of the profits.

While the exact nature of the skier_5’s program is unclear, it has been hypothesized that it offers game theory optimal decisions, while the player clicks the buttons and chooses whether or not to accept those decisions, or make player-dependent adjustments.

In this sense, it cannot be considered to be a “bot,” and has been deemed acceptable for use by PokerStars.

PokerStars’ terms and conditions prohibit external player assistance programs, designed to give an unfair advantage to the player.

“PokerStars defines ‘external’ to mean computer software (other than the Software), and non-software-based databases or profiles (e.g. web sites and subscription services),” reads the site’s terms and conditions.

“PokerStars defines an ‘Unfair Advantage’ as any instance in which a User accesses or compiles information on other players beyond that which the User has personally observed through the User’s own game play.”

According to skier_5, who turned up on TwoPlusTwo to defend his practices recently, the software has been submitted to a thorough investigation by PokerStars and has passed the requirements of the terms and conditions.

Skier_5 also claimed that “there is no automated decision software,” adding that “poker is a competitive game so I’m sure all of you understand my unwillingness to go into further details or address specific points of the accusations.”

However, most TwoPLusTwo-ers remain unsatisfied. If there is no automated decision software present, how is it that suspected users skier_5, allingirl777, freechdogg all have identical pre-flop, flop and even turn stats over a large sample of hands?

“No amount of cooperative studying could produce those results,” said poster “He I Se N Be Rg.”
Others called on PokerStars to change the rules and banish the software forever.

“So sad,” said another, posting as Spl0dg3. “Absolutely agree that this goes far beyond what should be acceptable on any online poker platform. You’re basically competing versus a machine, albeit that a human is clicking the buttons and could potentially deviate from the machine’s strategy, there’s close to 0 chance of them doing so.

“Really hope to see Stars change their stance on this and do the right thing,” he continued. “If they truly believe that what’s going on doesn’t breach their terms of service, then they need to be fully transparent with the community as to what the **** is going on.”

If it’s known to be used on high stakes play, you can bet it will soon be ‘standard equipment’ for the so-called casual player who just wants a better ‘edge’ …

has promised i will reveal what’s also been going on @ full tilt,what i have seen & observed,i can’t just write & run,i don;t have the time at the moment to answer any questions that may arise.(back within a week)
1. I’m not a conspiracy theorist
2.Haven’t even lost any money (long term)
p.s In the interest of fairness i have to give F.t right of reply, (for the upteenth time)if they don’t want it,i will divulge,in the meantime proceed with caution.