Play for a Share of $60,000 at Full Tilt’s New Adrenaline Rush Tables 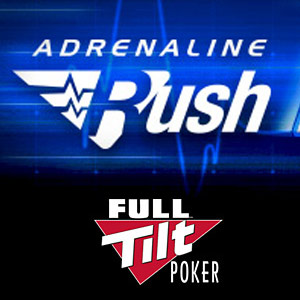 Full Tilt Poker is giving players a chance at their slice of $60,000 in Adrenaline Rush Knockout, a promotion for their newly revealed Adrenaline Rush variation of poker.

Full Tilt Poker’s Rush format was designed for players who wanted to game fast. Rush Poker brought high-speed stakes to those who wanted to quick challenges and a constant flow of fresh tables with new opponents. Feeling that Rush could go even faster, Full Tilt went full throttle and unveiled Adrenaline Rush to its lineup. To promote this even faster variation of poker, the site is giving players a chance to compete for sizable chunk of change.

Over the next two weeks, $60,000 in cash prizes is waiting to be claimed during Full Tilt Poker’s Adrenaline Rush Knockout. During Knockout, players will earn points each time they bust an opponent at one of the new Adrenaline Rush ring game tables. Those points will be used to compete for prizes on the Knockout leaderboards.

Two qualifying weeks are open for players to compete during. Week One runs from Monday, January 20th through Sunday, January 26th. Week Two begins on Monday, January 27th and ends on Sunday, February 2nd. Any real-money play at Adrenaline Rush tables during these two weeks counts towards players’ position on the Adrenaline Rush Knockout leaderboards. The top 100 players across the Low, Medium and High leaderboards will win cash prizes of $5,000, $10,000, and $15,000 respectively. Because your play is tracked across all three leaderboards, it’s possible to win up to three prizes each week. “We expect the action at the Adrenaline Rush tables to be fast and furious, with $60,000 to be won over two weeks and players racking up the knockouts and leaderboard points as fast as we can track them!” said Sarne Lightman, Full Tilt Poker’s head of marketing.

A Fast and Simple Way to Play

During Adrenaline Rush Knockout, players get a single point every time they “knockout” another player at an Adrenaline Rush table. A knockout occurs when you reduce an opponent’s chip stack to zero at the end of a hand. Because players are free to rebuy, multiple knockouts can be accrued from the same opponent during a session. Knocking out multiple players in a single hand will also reward points for every player that you bust.

The rules of Full Tilt’s exclusive Adrenaline Rush poker are fairly simple. Games are No Limit Hold’em and the tables aren’t any bigger than 4-handed. Players can buy in for between 5 and 10 big blinds and the only available actions are to raise or fold, there is no post-flop betting. Calling is only an option if your opponent is all-in, the cap of 10 Big Blinds has been reached or you are facing a raise greater than your stack size. The limited number of betting options and hands means that Adrenaline Rush games are short and simple. Full Tilt has raised the stakes on how fast players can potentially win or lose money, and the Adrenaline Rush Knockout promotion is a perfect and profitable way to be a part of the fast-paced action.