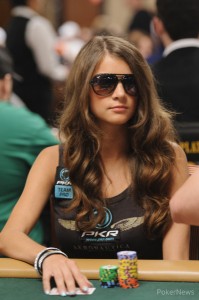 After four years almost to the day as a hugely popular member of PKR Team Pro, Swede Sofia “Wellbet” Lovgren has quit the site.

“In two weeks my next big adventure will be official,” tweeted the 24-year-old this week tantalizingly, leading to speculation that she has been picked up by PokerStars or FullTilt as a sponsored pro. Lovgren’s boyfriend, with whom she shares a flat in her native Gothenberg, is Luca Moschitta, a PokerStars Supernova Elite.

Lovgren was the hardest-working player on PKR.com when she was signed up for sponsorship by the UK-based online poker room that creates a realistic 3D environment for its players. Her impressive ring-game volume and results – as well as her tireless activity on the forums – caught the attention of PKR and they invited her on board. Thus, sponsorship was attained, not because of her dazzling looks as the cynics assume, but because of her ability to grind online poker like a machine.

Community & poker operations manager “PKR Danski”, broke the news to the PKR forum, adding she had “been offered an opportunity which any of us would find hard to decline.

“Of the more than 20 Team Pros we have been associated with, Sofia has had the greatest impact on our own players, and outside PKR’s walls. Her poker ability and more importantly her loyalty, professionalism, determination and work ethic are the reasons she has done so well, and why new doors have opened for her,” Danski added.

“After grinding millions of hands and just turning 20, I was given the responsibility to be the first female Team Pro. PKR has been like my second family and it has been an absolute pleasure to work with so many genuine and nice people and to represent this unique poker site and community,” said Lovgren in a statement.

Several days before Lovgren announced her surprise departure, however, PKR.com signed Eleanor ‘Elz442’ Gudger, 31, to its roster, as the third-ever female PKR pro. Gudger kicked off her poker career seven years ago, winning a PKR freeroll tournament, and went on to become the most prolific female tournament player in the site’s history, with career earnings over $225,000.

“I’ve always followed the progress of the PKR Team Pros, so part of me has always wanted to be part of that group,” said Gudger. “These kinds of poker sponsorship deals don’t come along very often, so I feel really fortunate to have this opportunity.”

Wow, lucky her… Notice they have no ugly fat sponsored pros…