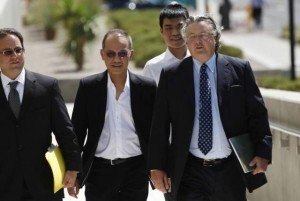 Malaysian high-stakes poker player Paul Phua and his son Darren are pleading not guilty to charges of operating an illegal World Cup betting ring from a luxury villa inside Caesars Palace this past July.

Meanwhile, five other members of the group are all pleading guilty and will stand trial and receive sentencing next week. Among them is Richard Yong, another high-stakes player, although the case against Yong’s son, Wai Kin Yong, has been dropped.

And federal prosecutors are no doubt getting ready for another rocking Christmas party, as they  work to seize $13 million from all seven defendants. The cache (and cash) would include cell phones, iPads, computers and $650,000 in both currency and casino chips.

The group was arrested last July when the FBI stormed the Caesars villas, one of which was described by the Gambling Control Board as a kind of high-tech “wire room,” where illegal World Cup bets were being monitored by computers remotely linked to others overseas.

Staff at Caesars became suspicious when the group demanded the casino install an unusually large amount of technical equipment in the rooms and asked for extra bandwidth on top the normal WiFi access. Employees also observed computer monitors that appeared to be showing odds of World Cup games.

Caesars’ employees then tipped off the FBI, who organized an evidence-gathering operation that involved turning off the WiFi access to the villas and posing as repair technicians in order to gain access.

Phua’s defense team moved to have the video evidence that was obtained during the undercover operation dismissed because, they said, it was gathered illegally; according to US law, authorities must obtain a search warrant unless suspects voluntarily waive their constitutional protections against unreasonable searches.

The defense team of Richard Schonfeld and David Chesnoff, which has represented numerous high-profile celebrities, is building a case around the premise that its clients’ Fourth Amendment rights were breached.

“Our lives cannot be private, and our personal relationships intimate, if each physical connection that links our homes to the outside world doubles as a ready-made excuse for the government to conduct a secret, suspicionless, warrantless search,” said the defense. “Only a few remote log cabins lack any Internet, electric, gas, water, cable, or telephone service. But the Constitution does not require us to sever all those connections, and live as hermitic luddites, to protect ourselves from the government’s prying eyes and secret cameras.”

Furthermore, documents submitted to the court last month revealed that Phua’s villa at the casino was not being used as a wire room to process illegal World Cup wagers, as had previously been alleged.

While all three villas were using the special high-speed Internet connections that initially aroused suspicion, only one, which was registered to another of the defendants, Hui Tang, was using it in the manner described by investigators.

“We are not guilty as we always maintained,” said Chesnoff. “It is our intention to fight the unconstitutional conduct of the federal government for our clients and for the rest of the public.