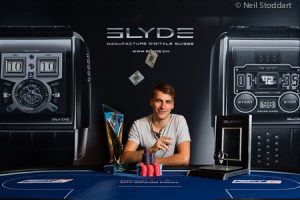 Most recreational players don’t yet know the name of Philipp Gruissem, but those who follow the high-stakes world of poker are very aware. The German has been winning live tournaments quite consistently since he entered the arena in 2011.

With the win of the EPT Grand Final €25K ($34,660) High Roller tournament in Monte Carlo on May 2, he climbs to nearly $9.5 million in live tournament earnings and is now the second-highest earning German poker player of all time, behind former WSOP champion Pius Heinz. He collected another million euros with this victory and becomes one of the winningest players in High Roller tournament history.

The first day of the €25K EPT High Roller tournament brought in 158 players, 47 of whom reentered when they busted. That put the total number of entries at 205, though registration remained open until the start of the second day. Many of the biggest names in poker got in on the action, but only 104 of them survived the day. Benny Spindler had the most chips with 384,300, and Philipp Gruissem was near the bottom of the board with only 63K.

A few more players reentered the tournament before play began, bringing the total number of entries to 214 for the tournament and creating a €5,243,000 ($7,268,895) prize pool. The top 31 players would be paid from that mass of cash. The numbers were also greater than the previous EPT Grand Final High Roller, which drew only 158 entries.

Play continued until Alex Kravchenko exited in 33rd place, and then Davidi Kitai ousted Igor Yaroshevskyy in 32nd place on the bubble. Govert Metaal was the first one to cash for €46,150 ($63,982), and others who followed to the cashier cage included Angel Guillen, Ole Schemion, Mike Watson, Benny Spindler, and Noah Schwartz. Vasily Kylukin then busted in tenth place for €95,950 ($133,025) to end the night.

The unofficial final table was set for May 2 with Kitai in the lead with 2,208,000 chips, followed by Byron Kaverman, Scott Seiver, Philipp Gruissem, Martin Finger, Stephen Chidwick, Chenxiang Miao, Pascal Lafrancois, and John Juanda on the short stack of 355K chips.

The day started with the quick elimination of Lefrancois in ninth place, at which point the official final table of eight players began. Miao was the first to exit, and though Kitai was going strong, Gruissem made his way into the chip lead. Seiver knocked out Chidwick, and Kitai took out Finger.

Gruissem was still doing well, seemingly unfazed by any cards. He took several big pots from Seiver and climbed to near 4 million chips. He took a big pot from Kitai with the nut flush over the king-high flush to catapult to 6.45 million chips, and Gruissem then eliminated Kaverman in fifth place and Juanda in fourth.

Seiver doubled through Gruissem during three-handed play, but that didn’t keep Gruissem off the top spot on the leaderboard. And when Kitai pushed his stack all-in, Gruissem called with Q-J to beat the A-5 of Kitai when a queen hit on the river.

Gruissem took the lead into heads-up, but he and Seiver quickly paused the action to strike a payout deal. They agreed to a chop and then to move all-in blind on the first hand when they returned. Seiver did move all-in blind with 3-2 of hearts, but Gruissem showed two red queens. The board blanked and officially gave Gruissem the victory, the SLYDE watch, title, and prize money.