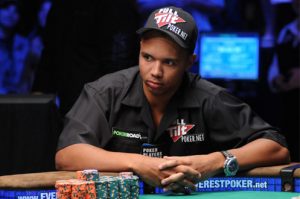 Phil Ivey has posted another $2 million in bail for defendants accused of running an illegal betting operation during the World Cup. (Image: WSOP.com)

Phil Ivey has involved himself with another set of defendants in an alleged World Cup betting operation, reportedly spearheaded by fellow poker pro Paul Phua; this time bailing out yet more defendants in the case. This go-round, Ivey posted $500,000 bail for Wai Kin Yong and another half-million towards the $1.5 million bail of Wai Kin’s father, Seng Chen “Richard” Yong.

Meanwhile, Daniel “Jungleman12” Cates posted the remaining $1 million of Richard Yong’s bail. At 56 years of age, Yong is a Malaysian junketeer and has a presence in high stakes cash games around the world. He was also one of the players to participate in the $1 million buy-in for the first Big One for One Drop charity poker event in 2012.

So while Phil Ivey must still dodge some legal hurdles of his own with the edge sorting claims from Crockfords and Borgata, he is doing his best to help others with their troubles. Besides securing the eventual release of Paul Phua and his son Darren Phua last week, three more men have now been released on bail with the support of Ivey and other notable poker players.

Ivey went to court to support the Yongs, who he says are personal friends. He reportedly said at the Yongs bail hearing that he had “the utmost respect and trust for them.” Hong Kong real estate executive Hui Tang was also released on a $1.5 million bond. Tang will be staying with Tom “durrr” Dwan at his home in Las Vegas as one of the conditions of his bail. Gabe Patgorski, another poker pro, is letting the Yongs stay with him. US Magistrate Judge Bill Hoffman restricted the defendants from engaging in gambling and they won’t be allowed to use devices that can access the Internet; they will also be subject to electronic tagging.

With this gesture, Phil Ivey has given out $2 million in bail money within a week’s time. The first $1 million went towards the bail required to release Malaysian businessman Wei Seng “Paul” Phua and his son Darren Wai Kit Phua. Andrew “good2cu” Robl paid the additional $1.5 million. Paul Phua frequents nosebleed high stakes cash poker games in both Las Vegas and Macau; games that Ivey and Robl obviously have access to as well.

The FBI has been investigating Paul Phua as the alleged ringleader of a multimillion-dollar betting operation. This operation was alleged to have taken illegal bets during the World Cup tournament in Brazil. Eight defendants were indicted following a sting and arrests surrounding the operation, which ran from June 6 through the July 13. The defendants were charged with “one count of unlawful transmission of wagering information and one count of operating an illegal gambling business” according to the Nevada District Attorney’s office.

The red flag was raised to potential illegal activities when eight DSL lines and a large amount of electronics were requested for three villas the defendants were occupying at Caesars Palace on the Las Vegas Strip. The technical staff at the hotel became suspicious after seeing screens that displayed similar information used for sports betting at the property’s own casino. Caesars was not named in the investigation. Additionally, the FBI accused Paul Phua of being a member of the Chinese 14K Triad, one of the biggest crime syndicates in the world.

Fairs fair it seems Ivey is a good friend to have, he seems to help out alot of the time when he can . Maybe after the Full Tilt mess he is trying to restore his good name, but with other court cases waiting not sure if it will convince everyone…