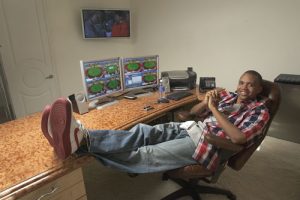 When your name is Phil Ivey, you can afford the occasional financial setback. Still, he can’t be satisfied with his online poker results in 2015.

The man dubbed the greatest poker player in the world, maybe ever, didn’t live up to his moniker throughout the past year, at least not online.

Since 2012, Ivey has used the screen name “Polarizing”, but hasn’t had the kind of success online as he did in the past. In fact, his $2.4 deficit in 2014 was only surpassed by legendary online poker loser, Gus Hansen.

Ivey’s current struggles couldn’t come at a worse time. He’ll be up for a Poker Hall of Fame election next year.

Although the massive losses won’t hurt his induction chances, he’s a 10-time WSOP bracelet winner, heading into the Hall of Fame on a downswing doesn’t look good.

What may come as a huge surprise to many, Viktor “Isildur1” Blom went in the opposite direction of Ivey in 2015.

Blom, known as an online poker maniac due to his penchant for splashing around the pot, was the Internet poker world’s biggest winner this past year.

Isildur won better than $2 million in 2015. He did have a rough run on Full Tilt Poker, losing about $1.4 million, but more than made up for it on PokerStars.

Other big names to join Phil Ivey on the “in the hole in 2015” list include Jason Mercier, Phil Galfond, Sam Trickett, Dan Cates, and Jean-Robert Bellande.

For the first time since 2009, Dan “jungleman12” Cates was an Internet poker loser. He is $300,000 in the hole for the year, which is merely a fraction of what he claims to have lost, $5 million, in a live cash game this past summer.

A brutal run in 2014 and 2015 online won’t do much to change the public perception of Phil Ivey being one of the best, if not the best, poker players in the world.

On February 1st, Ivey will turn 40, making him eligible for the Poker Hall of Fame. With 10 WSOP bracelets, millions in lifetime cash and tournament winnings (online and offline), he’s a virtual lock for induction.

Bad runs online and live happen, even to greats such as Phil Ivey.

this kind of in a way proves that poker irl is more a social game than numbers, or that the social aspect of poker is probably super important. hope that makes sense lol.

those are some brutal numbers ..