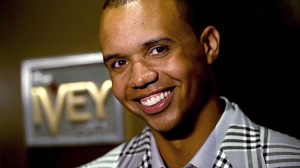 Phil Ivey has received his license to dispense medical marijuana, but does he realize it could bar him from playing in US casinos? (Image: Tom Donaghue/AP)

Phil Ivey, Pot Purveyor: that shingle could be getting whipped up, even as we speak. Yup, Ivey has received a license to dispense medical marijuana in Nevada.

Maybe it’s because he hasn’t been in the news much lately and so he figured he’d just go out and do something crazy, because Ivey was one of 26 licensees approved by the Las Vegas City Council on Wednesday.

Marijuana has been legal for medicinal purposes in Nevada since 2000, but in 2013, the state passed a bill that would allow actual businesses to dispense the drug. Nevada gave the go-ahead for 66 licenses throughout the state.

However, while the distribution of medical marijuana is now legal under state law, it officially remains a federal crime, causing many headaches from a financial standpoint for marijuana dispensaries.

But after all, Phil is used to financial entanglements these days, isn’t he, following his various edge-sorting suits with London’s Crockford‘s Casino and Atlantic City’s Borgata.

Could Ivey’s new business venture be the reason behind the closure this week of the free online games at Ivey Poker? The website launched two years ago as a training site and offered play-money online poker games, and would, it was always assumed, be converted into a real-money online poker site when the regulatory landscape was ripe.

But the Nevada Gaming Control Board has made it explicitly clear that none of its licensees may have anything to do with the state’s newest industry in pot sales, medical or otherwise.

This has led several casino executives into renouncing interests in medical marijuana companies, including marketing executive for Real Gaming, Tom Mikovits. While Mikovits does not have a gaming license himself, he is a high-profile executive with Real Gaming and decided his actions were in the best interests the company. It could be that the cessation of play-money poker games on Ivey Poker was one of the conditions of the granting of the license, as in the meantime the site is continuing to operate as a training service.

“We plan on suspending the current games this Saturday, October 25,” explained Ivey last week. “Though that may sound ominous, it’s actually just the first step in our evolution as we prepare to launch an even bigger and better gaming experience for you all in 2015. We do appreciate all you have done for us here at Ivey Poker; it has been a joy and a learning experience for all of us…and one that we hope will continue as we grow and evolve! Stay tuned for more, the best is yet to come!”

Casino executives were told recently by a group of federal regulators that their gaming houses must refuse bets from people they know to work in the medical marijuana industry. Speaking at the 2014 Bank Secrecy Act Conference, regulators warned that the federal stance on marijuana means that the US government will not allow the casino industry to handle the proceeds of marijuana sales. Should a casino knowingly accept a bet from a person working in the medical marijuana industry, they said, it could face prosecution.

Casinos can’t accept any money from them [marijuana workers],” said former White House advisor on money laundering issues Jim Dowling, “or they have to comply with the new government guidance. This is a federal problem that has been brewing for a while, and now it’s coming to a head. State laws and federal laws don’t match up.”

Get some more attorneys on your team, Phil; this could be interesting.