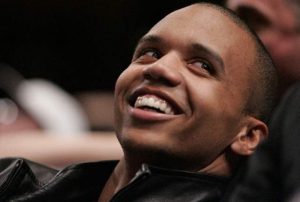 Phil Ivey might be knee-deep in an ongoing legal battle with the Borgata over a $9 million baccarat session, but that doesn’t appear to be distracting him from his online poker duties.

Despite having mixed results online over the last few months (mainly because he’s been grinding live games in Macau), Ivey rallied himself at the start of September to achieve a $400,000 upswing.

The majority of this profit has come in the last week thanks to winning sessions against the likes of Sean Rafeal and an unknown grinder called ‘JayP-AA’.

In fact, over the last seven days Ivey has managed to rake in $250,000 which, when combined with his previous winnings for the month, means he’s now only $600,000 down for the year on PokerStars.

Ivey Up but Still Down

Although recouping that amount would be a proverbial mountain to climb for most players, it could easily be a few winning sessions in the life of Ivey.

However, even if he is able to clear his PokerStars’ debt, that would still leave him down by $1.2 million on Full Tilt.

Unfortunately, since the site decided to switch its policies regarding cash games and remove many of the high stakes tables, it looks as though Ivey won’t be recouping those funds any time soon.

Blom Down but Still Up

While Ivey has enjoyed a rare upswing in recent weeks, the opposite is true for Viktor Blom.

The kamikaze Swede recently posted a $909,004 profit in August to take his annual online earnings close to $3 million.

In fact, breaking the numbers down, Blom has managed to bank $2,955,738 over the course of 33,780 hands and 186 sessions in 2015. Unfortunately, however, at least 25 percent of that haul has now been scattered back among the high stakes community.

Over the last seven days Blom has dropped $744,178 which not only puts him more than $330,000 ahead of his closest rival, but makes him the biggest loser of September so far.

Fortunately, the young pro’s latest slip hasn’t pushed him down the annual high stakes leaderboard as he remains more than $1 million ahead of “bbvisbadforme”.

The same can’t be said for Ivey, however. The American is down more than $1.8 million in 2015 and is looking likely to end the year as the biggest loser ahead of “Sanlker” and Mikael Thuritz.

Of course, if the American pro can pull off a last minute win in his legal case against the Borgata then he’d instantly become the biggest poker winner of the year.

wish i could play the big money,but the up down swings would prob drive me crazy

I could not handle the swings