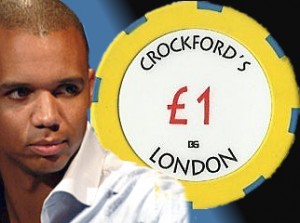 Phil Ivey has lost his case against Crockfords in London over the winnings he earned by using edge sorting techniques in punto banco. (Image: calvinayre.com)

Phil Ivey has lost his case against Crockfords Casino, as the High Court in London ruled that Ivey’s edge sorting techniques are cheating as defined under civil law. The ruling, by Judge John Mitting, found that the casino was justified in withholding Ivey’s winnings.

“He gave himself an advantage which the game precludes,” Judge Mitting said. “This is in my view cheating.

The poker pro was predictably disappointed that he was unable to secure the £7.7 million ($12.4 million) he won playing punto banco, a form of baccarat, in the casino during an August 2012 visit. Ivey contended that his tactics in playing the game were legitimate ways of gaining an advantage over the casino, not a form of cheating.

“I am obviously disappointed with this judge’s decision,” Ivey said in a statement. “As I said in court, it is not my nature to cheat and I would never do anything to risk my reputation.”

“I am pleased that the judge acknowledged in court that I was a truthful witness,” Ivey added.

Debate over Legality of Edge Sorting

It’s not surprising that Ivey’s testimony was seen as truthful, as the facts of the case were essentially agreed upon by both sides. Ivey and an accomplice played at a private, high-stakes baccarat table where Ivey bet as much as £150,000 ($241,000) on each hand. After starting out with some early losses, Ivey won big.

The secret behind the poker player’s success, however, was a technique known as edge sorting. Ivey negotiated with the casino to use a specific brand of playing cards, and then had the dealer turn some of the cards in the deck 180 degrees, ostensibly for superstitious reasons.

What Crockfords didn’t know at the time was that those cards were not perfectly cut, and that a person with knowledge of this could tell which cards could be turned by examining the edges of the card backs. This allowed Ivey to distinguish high cards from low ones, which was enough for Ivey to gain a large advantage over the casino.

“I believe that what we did was a legitimate strategy and we did nothing more than exploit Crockfords’ failures to take proper steps to protect themselves against a player of my ability,” Ivey said.

Not surprisingly, Crockfords saw the case differently, and felt vindicated by the verdict.

“Crockfords is pleased with the judgment of the High Court today supporting its defense of a claim by Mr. Ivey,” a spokesperson for the casino said. “It is our policy not to discuss our clients’ affairs in public and we very much regret that proceedings were brought against us. We attach the greatest importance to our exemplary reputation for fair, honest and professional conduct and today’s ruling vindicates the steps we have taken in this matter.”

Ivey was apparently denied an immediate appeal, but his lawyers may apply to the Court of Appeal directly instead.

This is just the first of two cases between Ivey and a casino over millions in winnings that were gained through the use of edge sorting. The Borgata in New Jersey is suing Ivey over $9.6 million that he won over the course of several visits, claiming, like Crockfords, that his techniques constituted cheating. In that case, however, the Borgata paid Ivey initially, and is now looking to recover that money.

Probably the dumbest thing I’ve ever heard quoted by a judge:

How did he give himself an advantage which the game precludes? Did IVEY supply the deck of cards. Wouldn’t it be that the Casino gave him this advantage?

This is infuriates me.

They used distraction techniques, had an accomplice ask for the cards to be shuffled a certain way, so that inaccuracies were more apparent. There are rules to the game that you agree to abide by when you play. You violate these rules, you are cheating. He violated the rules.

is it Ivey’s fault the casino failed to do their primary job? Being the house means that you lose sometimes. Because a player either exploited your game, or bad luck. Fix the leak pay the bill and go back to making money? Isn’t that the entire industry? What a weird thing to do for a casino. I know very little about the two casinos but what I do know is; Borgata had a counterfeit chip scandal and an issue with Ivey about cheating. Bad press if you ask me.