Phil Ivey and his gambling buddy “Kelly” Cheng Yin Sun have lost their longstanding legal battle with the Borgata Casino and Hotel in Atlantic City and were ordered, Thursday, to pay the casino $10.1 million in restitution. 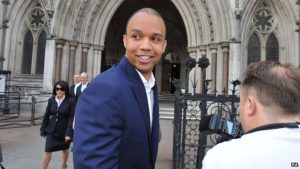 Phil Ivey lost his $10.1 million court battle with the Borgata on Thursday, but at least he gets to keep the comps. Ivey seen outside the Royal Courts of Justice during the Crockfords case, with Kelly Sun in the background. (Image: BBC)

The Borgata sued Ivey and Sun after the pair won $9.6 million at its mini-baccarat tables, claiming fraud. Just as they were leaving the Borgata on the fourth day of their winning streak, news filtered through from London, England that Crockfords Casino was withholding $12.4 million on suspicion that Ivey and Sun had been cheating by edge-sorting.

Edge-sorters are able to identify tiny unsymmetrical flaws in the patterns on the backs of playing cards in order to gain an edge over the house.

In subsequent court-cases against both casinos, Ivey and Sun admitted freely that they were employing the practice but argued they had won the games legally, using skill to outwit the casino.

But in October, a New Jersey judge ruled that the players were in breach of their contract with the Borgata and that they had essentially benefitted from a game that used “marked cards,” in violation of state gaming law.

Ivey and Sun had not touched the deck, but they had tampered with it, in a sense, by demanding that the dealer rotate certain cards in the deck 180 degrees.

They explained this away as a superstitious ritual, but in fact they were sorting the cards into two groups, one strategically advantageous, which could then be identified by their edges.

Furthermore, by muscling the odds in their favor, said the judge, they were subverting the game of baccarat into something that was very much like baccarat, but was not baccarat, since the house edge is one of the game’s defining characteristics.

Thus, they were playing a game that was not regulated by the New Jersey Casino Control Act.

How Damages Were Calculated

The judge dismissed the Borgata’s claim of fraud as well its request for $15.5 million in damages, which was based on the mathematical expectation of what the pair would have won had they been playing without an advantage over the house. This was, said the judge, “too speculative a solution.”

Instead, he effectively returned the parties to their respective financial situations before the games took place. That includes the $9.6 million, plus $504,000 Ivey won at craps while betting with the disputed baccarat winnings.

If Ivey and Sun are in any mood to look of the bright side in all this, they were, at least, excused from repaying the $504,000 in comps they received during their stay.

Ivey lost his case against Crockfords last year, in which he was plaintiff, and the case is on appeal. It is not yet known whether Ivey and Sun intend to appeal the Borgata decision.

I sure don’t want to be In his shoes

No biggy unless he spent it..