Phil Ivey has been noticeably absent from the tournament poker scene for the past few years. He’s been busy, reportedly, playing nosebleed stakes in Macau, competing against some of the highest rollers on Earth. 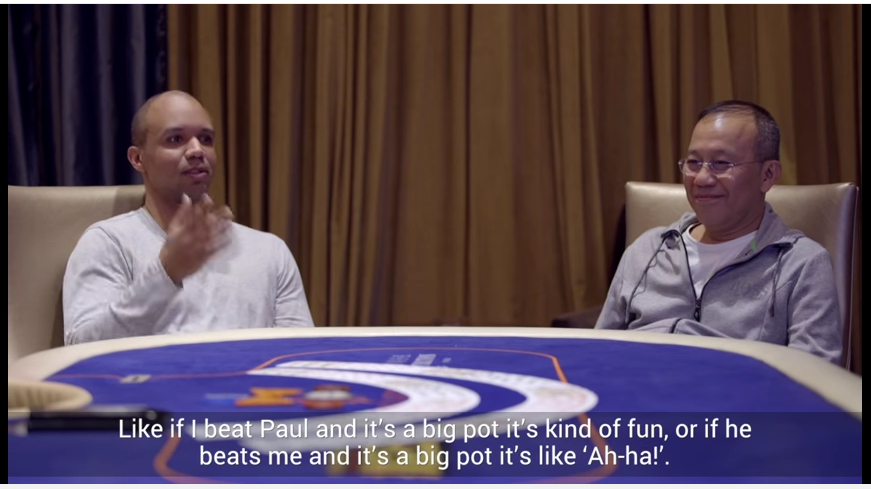 Phil Ivey sits down for a YouTube shoot with Paul Phua, one of his favorite players in big games around the world, to discuss beginners-level poker tips. (Image: YouTube / Paul Phua Poker)

Ivey recently appeared in his first public interview this year. It was a YouTube video that ran less than two-and-a-half minutes, posted by “Paul Phua Poker,” and was titled “Paul Phua Poker School: Tips from the Pros, Part 1.”

In it, Ivey and Phua, a controversial highest-stakes gambler, sat at a table discussing some beginner poker tips.

What advice would Ivey give to inexperienced poker players?

“One thing is to take notes of their hands. Try to remember the hands they played, what they were thinking about, what was going on in their minds when they play the hands,” Ivey offered.

“Also, an important thing is to be able to manage their money,” he said. “You don’t want to be in a situation where you end up losing more than you can afford to lose. You know, they have to understand that it doesn’t matter so much what you have. It’s more what your opponent has, and you can adjust your play based off of that.”

Ivey also told Phua he would advise beginner poker players to avoid playing when tired. He said that was a “super important” tip.

Learn from the Pros

Other high-stakes pros who have become popular in big games in Macau, Manila, and other Asian locations popular with Phua and his friends would join the advice session.

Dan “Jungleman” Cates advised beginners to play tight. Inexperienced poker players shouldn’t play too many hands, he explained, but also reminded them that the time to bluff was when an opponent “has nothing.”

Cates continued: “The third tip would be to try and think of the game in terms of an overall plan instead of what they have at that very moment in time. Basically, just focus on the bigger picture rather than each individual hand,” he said.

Then Dan Colman joined in on the table talk with Phua. Colman won the 2014 $1 million buy-in Big One for One Drop tournament. His first tip for beginners was to not worry about results. Instead, he suggested, it’s best to focus on how the player played each hand, regardless of results.

Paul Phua, the quiet man with glasses who’s helping direct the strategy discussion in the video, is a wealthy businessman who’s been accused of running a major international illegal sportsbook (out of a Caesars Palace suite). But he beat the charges.

A longtime gambler and casino junket operator, Phua and his wealthy cohorts took to poker about seven years ago, and soon were playing at high enough stakes that their games attracted the likes of Ivey, Tom Dwan, Andrew Robl, and others Las Vegas pros to various poker rooms in Macau and elsewhere around Asia. The games would become some of the biggest games in history.

After the pros shared their beginner tips, it was Phua’s turn to impart his wisdom.

“In my first few years of poker I always ate and slept poker, developing hands even after the game,” Phua said. He would constantly ask himself if he played the hands correctly. If he wasn’t sure, he would ask “someone better than me,” for an opinion on how to better play the hand.

Are they trying to $rake$ in viewers? It must be fun.