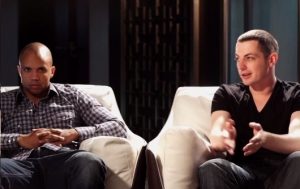 Phil Ivey and Tom Dwan star in a bizarre video to discuss the virtues of a novel game known as Six-Plus Hold’em.

Phil Ivey and Tom Dwan, both high stakes legends in their own right, appear to have found a new poker variant to satisfy their competitive urges.

Known as Six-Plus Hold’em and seemingly an innovation coming out of Asia, the new game is, according to the two pros, “more exciting” and filled with a lot more action.

To espouse the virtues of Six-Plus Hold’em, Ivey and Dwan prepared an impromptu (read: “staged”) interview which has since found its way online.

Aside from looking decidedly uninterested, both Ivey and Dwan seem to know less about the game than we do.

Although they do their best to explain some of the game’s nuances, it’s clear to anyone with a rudimentary set of reading skills that they are bluffing their way through much of the interview.

In fact, when asked what tips he’d give a beginner, Dwan essentially held his hands up and said: “I’m still trying to figure out the game myself.”

So what is Six-Plus Hold’em? From what we can tell, the game is similar to regular Hold’em, but there are a few twists. The main difference is that the deck starts from six upwards, which means there’s only 36 cards in play.

To help add some extra spice, an ace can be used as its true value or as five, which is similar to a number of wild card poker games. As well as these structural deviations, the hand rankings are also slightly different.

Instead of straights beating three-of-a-kind the roles are reversed in Six-Plus.

Moreover, flushes are superior to full houses because it’s tougher to align five of the same suit when there are only nine suited cards in the deck.

The final rule, which is one that can differ depending on where you’re playing, is the number of community cards used. Although some games use a fifth community card, many versions only use four.

When the latter condition is in play the players who make it to the final betting round all have three hole cards and they must use two (and only two) to make the best five card hand possible (see boxout for the rankings).

Why Six-Plus Hold’em? Why Now?

So why would Ivey and Dwan appear in an awkward video to talk about a game they seem to know very little about?

The most likely reason is because they are doing it as a favor (possibly a financial favor) for an Asian poker player or businessman.

The two pros have been spending a lot of time in Macau recently and it’s likely one of the games they play for nosebleed stakes with action junkies such as multi-millionaire amateur, Paul Phua.

Of course, both Ivey and Dwan are notorious for shunning the poker media, so there’s probably a lot of money at stake (or at least a seat in Macau’s big game) for publically supporting Six-Plus Hold’em.

If you’re still as confused and bemused by the Six-Plus promo as we are, here’s a rundown of the hand rankings used in the game:

Four of a kind (quads)

Three of a kind

If you can master these rankings then maybe you’ve got a shot at being better than Ivey and Dwan.

Watch The Six-Plus Hold’em Interview For Yourself

That video was painful to watch. The game sounds reasonably fun though – hard to expect it’ll make a big dent in the live poker scene, though online I could see it gaining a niche.