Phil Ivey and the late David “Devilfish” Ulliott received poker’s highest honor this past weekend. As part of ESPN’s WSOP Main Event broadcast, the legendary pros were inducted into the Poker Hall of Fame as the club’s 53rd and 54th members. 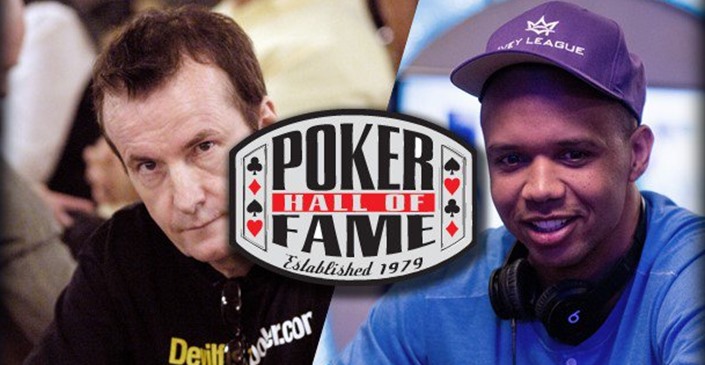 The late David “Devilfish” Ulliott and absent Phil Ivey were inducted into the Poker Hall of Fame as the club’s 53rd and 54th members. (Image: highstakesdb.com)

There were 10 deserving poker players and ambassadors nominated for the prestigious award, but only two are selected each year. The eight individuals who didn’t make the cut this year but could be back on the ballot in the future were Huck Seed, Matt Savage, Max Pescatori, Mike Matusow, David Chiu, Mori Eskandani, Ted Forrest, and Thor Hansen.

Ivey, after having turned 40 in February, was a virtual Hall of Fame lock. But the second inductee caused quite the debate on social media. In the end, the 27 living HOF members and 18-person media panel voted in Ulliott.

Phil Ivey has been an unstoppable force in poker for nearly two decades. The New Jersey native has 10 WSOP bracelets, more than $23 million in lifetime live tournament winnings, has reportedly won millions in the highest stakes cash games in the world, and his old Full Tilt Poker account turned a $19 million profit, nearly $8 million more than any other online poker account in history.

Dubbed the “Tiger Woods of Golf” for having dominated the game of poker like Tiger did during his prime years on the PGA Tour, Ivey has collected titles in the WSOP, Aussie Millions, WPT, Poker After Dark, and the 2008 LA Poker Classic.

He’s one of the winningest players in both WSOP and WPT history. Ivey has won more than $4 million and made 10 final table appearances on the World Poker Tour. At the World Series of Poker, he has $6.5 million in cashes and 10 bracelets, second only to Phil Hellmuth’s 14. His 10 are tied with longtime hall-of-famers Doyle Brunson and Johnny Chan, and puts him ahead of Johnny Moss (9) and Erik Seidel (8), both already in the Hall of Fame.

Ivey was not in attendance for any induction ceremony, but he did issue the following statement upon learning of the honor:

“I want to thank the living members of the Poker Hall of Fame as well as the media who voted for me to be part of the Poker Hall of Fame. It’s an honor to be inducted alongside legends like Chip Reese and Doyle Brunson.  I love the game of poker and the game has done a lot for me.  I am one of the lucky people who has been able to make a living playing a game which was always my passion.”

During the Main Event, however, he was taking on possibly an even bigger challenge. On July 13, Ivey relaunched legal proceedings with the UK Supreme Court, seeking to overturn a previous ruling that said he owes Crockford’s Casino nearly $10 million for a 2012 baccarat win in which the casino claims he improperly participated in “edge sorting” to give him an unfair advantage.

‘Legend of the Devilfish Lives On’

David Ulliott was given the nickname “Devilfish” in 1997 by the host of a poker game he frequented. A devilfish is a poisonous fish that can kill when ingested if not properly prepared. When his opponents weren’t prepared for a fight, Devilfish would kill off their chip stacks.

He was anything but a fish at the poker table, however. Ulliot had more than $6.5 million in lifetime live tournament winnings, including a 1997 WSOP bracelet in a $2,000 Pot-Limit Omaha event, his best game. In many ways, he was the face of poker in the UK and Europe in the years leading up to the poker boom.

Devilfish was diagnosed with colon cancer in February 2015 and died two months later at age 61. His family released a statement about his Hall of Fame induction:

“As a family, we would like to thank the general public, media and current Poker Hall of Fame members that voted David into the Poker Hall of Fame.  We know he will be up there strumming on his guitar and probably asking what took so long. How he might say it, I think you all know. There isn’t a day that goes past when we don’t think of him and miss him but today we are so proud and delighted that he takes his rightful place in poker history, the legend of the Devilfish lives on.”

Ulliott hails from the same town, Hull, East Yorkshire in England, as John Hesp, the 4th place finisher in last week’s WSOP Main Event. Hesp quickly became a crowd favorite at the final table, much like Devilfish was for many years on televised poker shows. Ulliott’s family, in the released statement, said John “represents what poker is all about, a true game of the people.”

Ulliot’s family left one final piece of advice for poker fans from the quotable Devilfish:

“Life is a blast. It doesn’t last. Live it long and live it fast.”