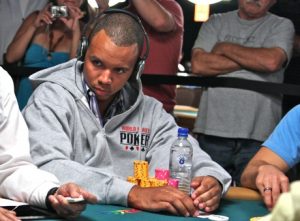 Phil Ivey will sit for an interview for 60 Minutes Sports, to discuss two separate allegations that he cheated in baccarat games. (Image: highstakesdb.com)

Phil Ivey will appear on 60 Minutes Sports on Showtime this week to show a side of him that the world and many poker fans have yet to see.

On October 7, 60 Minutes Sports will air an interview CBS reporter James Brown conducted with Phil Ivey on Showtime. In anticipation of the interview’s premier, CBS released a teaser segment giving viewers a small glimpse at what they can expect to see. The teaser shows Brown discussing the types of games Ivey plays, his lifestyle, and the implications of the lawsuits he is facing.

Brown and his film crew followed Ivey around Las Vegas during the World Series of Poker earlier this summer. Alvin Patrick, the producer of Ivey’s segment on 60 Minutes Sports, also provides some insight on his impression of the poker player’s life.

Patrick says that Ivey gambles on just about anything, and even lost $500,000 betting on the World Cup during the World Series of Poker. Patrick mentions that Ivey has even been known to hustle famous people like Michael Jordan on the golf course. As a producer, Patrick claims that it’s unusual for Ivey to speak openly and that he’s been trying to get an interview with the pro for five years.

The teaser aims for some lightheartedness, with Phil Ivey teaching James Brown a few tips on poker. However, the real issue of the accusations against Ivey is the focus. Both the Crockfords Casino and the Borgata Hotel Casino & Spa are accusing Ivey of cheating at their locations.

In fact, Ivey is in London this week, facing Crockfords in the High Courts, leading to speculation if the interview running is entirely coincidental, since it addresses the case itself.

In May 2013, £7.8 million (nearly $12 million) was won by Ivey while he was playing punto banco at the Crockfords Casino. Crockfords refused to pay Ivey his winnings, so the poker pro filed a lawsuit against them. Borgata in Atlantic City also filed a $9.6 million suit against Ivey, saying he cheated during a baccarat session.

Both casinos are accusing Ivey of using “edge sorting,” which is a method of identifying and exploiting small flaws in the manufacturing of playing cards. During this time, Ivey also had a Chinese accomplice named Cheng Yin Sun help him beat the house. The two would work together to identify the flaws in the cards and differentiate the “good” cards from the bad ones.

When asked by Brown about the accusations, Ivey responded by saying, “Once you get cheater next to your name, especially in my business, which is the business of gambling, it’s really bad.” He goes on to declare that his actions were not cheating. “Some people believe that it was cheating, I know it wasn’t and that’s why we’re going to court.”

Though it will be hard to predict how the courts will side on the matter, many believe that Ivey didn’t necessarily do anything wrong. Of course others, including the casinos, believe that Ivey’s actions were not a matter of skill, but just of cheating.

Innocent until proven guilty. If proven it would be a travesty as he said. Everyone would think he’s gaming them and some would call his earlier success into question. Casinos are becoming way more adept at catching cheats. Hope its wrong I always thought he was one of the best. This wasn’t poker though that they’re accusing him of though. If he’s caught how would that affect him with poker?