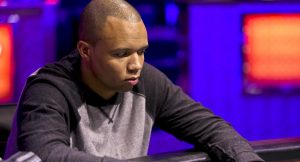 Phil Ivey tops the list of the biggest losers in online games, with nearly $300,000 in the red during the first two weeks of 2015. (Image: HighStakesDB.com)

Phil Ivey is already among the biggest poker losers in 2015, according to multiple industry reports.

His profile in the poker world has gained him a fair share of both notoriety and infamy. Most know that 2014 was a trying year for the pro, as he faced a highly publicized legal battle amid allegations of cheating.

But like any determined player, Ivey keeps diving into the game. Unfortunately, the first days of 2015 are seeing Ivey topping the list of online losers, with nearly $300,000 in the red already tilting his bank account.

According to the HighStakesDB, Ivey is 2015’s current biggest loser when factoring in both site and overall performance.

However, unlike Ivey, Amundsgard took the sting out of that major loss with $21,368 in winnings on Full Tilt, playing under his “no_Ola” moniker. Despite his entry into the biggest losers, Amundsgard pulled off winning the biggest hand of 2015 so far. In a $100/$200 pot-limit Omaha hand, he won $69,053.10 playing against Colombia’s Daniel “d2themfi” Isaacson.

Even though we’re only two weeks deep into 2015, there have been some impressive hands played online.

While Russia’s “Trueteller” might not keep the record for long, he is currently the biggest winner of the year with $231,762 in profit, made across 22 sessions and 2,112 hands on PokerStars. A majority of Trueteller’s action was against Ivey, Cort “thecortster” Kibler-Melby, and “arabianights” at $1,000/$2,000 2-7 triple draw tables.

Daniel Isaacson completed the top three with $128,437 on PokerStars across 18 sessions and 805 hands.

For Phil Ivey, January’s numbers don’t provide much relief from the bad luck the pro had at the close of 2014.

Ten days into December, Ivey was down $558,220, marking a less-than-stellar performance over the year. That loss in profit made him down nearly $2.5 million for the entire year and the second biggest loser in 2014, bested only by Gus Hansen, who found himself at $5.4 million in the red.

Of course, online losses can’t compare to the highly publicized cheating accusations Ivey faced against Crockfords Casino in May 2013.

In October 2014, a High Court in London ruled in favor of Crockfords, saying Ivey’s method of “edge sorting” in games of Punto Banco were considered cheating under civil law. Feeling that his £7.8 million ($12.4 million) shouldn’t be withheld, Ivey decided to appeal in November.

Whether or not his early streak of bad luck continues for the rest of the year remains to be seen.

A great man once said, “keep things in perspective, the bigger picture is what really counts.”

Mr. Ivey’s total net worth is approximately $100 millions, the above quoted losses represent just under 3% of his total money pool. Now I used pool as a analogy for this reason, image taking a cup of water from your back yard swimming pool, maybe enough to water a plant but hardly enough to impact the water level of the pool. What Mr. Ivey has loss this year and in 2014 represents that cup of water from the back yard pool. Also, let’s not forget the 10 WSOP championship bracelets, not to mention nine World Poker Tour final tables. Ivey is regarded by numerous poker observers and contemporaries as the best all-round player in the world. So, while he may be in a little slump, something ALL champions experience, I would not be surprise if he comes back hitting home runs later in 2015 and many years in the future. Like the saying goes, nothing is wrong with getting knocked down, its what you do after getting up, and we know Phil plays best under pressure. So, online, tournaments and live games, I would be very careful if you are playing Mr. Ivey. And as a side not, Phil is by far one of the most generous poker pro’s with his charitable foundations, something he choses to do, not has to do.

There is something to be said about the “bottom line.”

It is late and I’m tired, please excuse the typo’s in my previous……..uggg