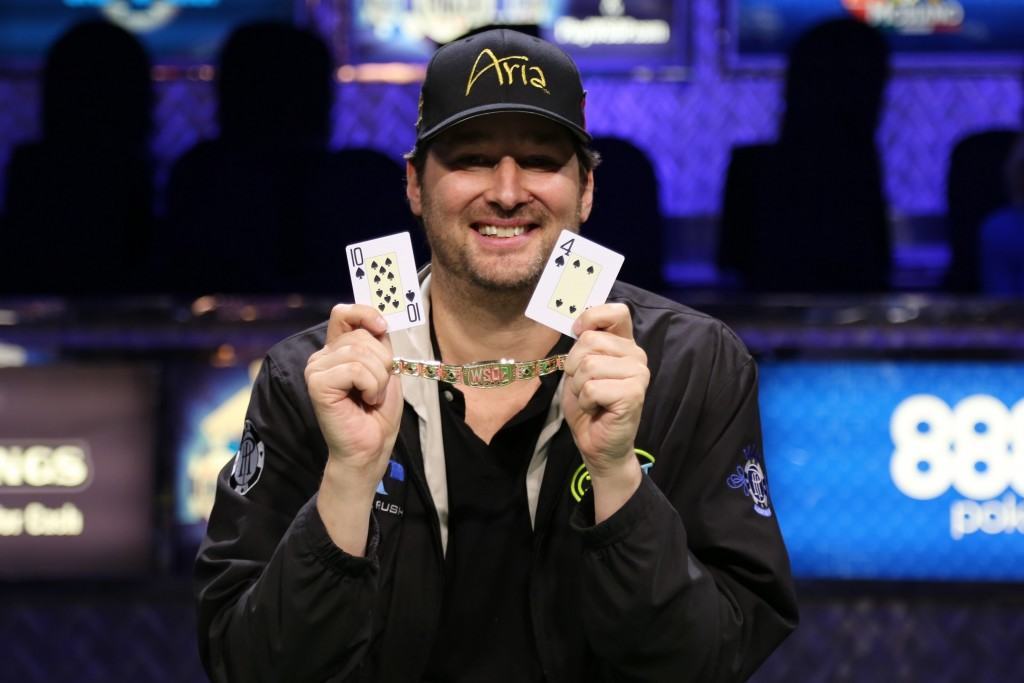 10-4, good buddy: Phil Hellmuth’s 14th World Series of Poker bracelet puts him ahead of many other greats by four. (Image: bluff.com)

Phil Hellmuth’s 14th career win at WSOP will be all anyone talks about today, because yes, he did it again.

Hellmuth is arguably the most successful player in the history of the World Series of Poker, and without question has the most bracelets of anyone to ever play the game. He added yet another one to his collection on Monday, extending the legend of the man they call “The Poker Brat.”

Hellmuth won his record-increasing 14th WSOP bracelet by taking down the $10,000 Razz Championship, a tournament that drew a tough field of just 103 players. Hellmuth rose above them all again, however, claiming yet another title and the $271,105 prize after defeating Mike Gorodinsky in heads-up play.

Phil was once seen as a tournament Hold’em specialist. After all, his first 11 bracelets all came from that game. But in 2012, he won a $2,500 Razz bracelet, and now he has added a second title in this offbeat lowball game.

“I think I figured something out about Razz in maybe 2012,” Hellmuth told WSOP.com. “All of a sudden the game just clicked. I was like ‘Wow, this game just makes sense.’”

The numbers on Hellmuth’s WSOP career are astounding. He has cashed 109 times at the WSOP, made 52 final tables, and has nearly $12.8 million in lifetime earnings at the World Series.

Hellmuth had more than a little competition at the final table. Brandon Shack-Harris, Thomas Keller, Mike Leah, and Gorodinsky were all previous bracelet winners who reached the top eight, making the poker super star’s accomplishment all the more impressive.

The win extends Hellmuth’s lead over the rest of the world in career bracelets to four. Doyle Brunson, Johnny Chan, and Phil Ivey each have ten bracelets in their WSOP careers.

As expected, the $1,000 Turbo No Limit Hold’em tournament raced along to a winner on Monday. Coming out on top was John Gale, one of the most successful British players of all time, who claimed $298,290 and his second career WSOP bracelet with the win.

Gale had previously won the 2006 $2,500 Pot Limit Hold’em event. Gale now has over $3.6 million in total earnings, including just under a million at the WSOP itself.

But having not cashed in a WSOP event since 2007 before this year, the victory was almost as sweet as his first one nearly a decade ago.

“It is still incredible,” Gale told WSOP.com. “I cannot believe it, I am over the moon.”

While he may be an old hand at the WSOP, most of Gale’s opponents at the final table were not. He was the only player in the final nine who had a WSOP bracelet going into the event, and three of his final opponents had never cashed at the WSOP. That included runner-up Gary Luther, who took home $184,481 for his second place finish.

If you’re looking to sweat some of the best poker players in the world on the final day of a tournament, you might go looking for one of the $10,000-level events in a game other than Texas Hold’em. But that’s not always the case, and the Millionaire Maker is proving it. 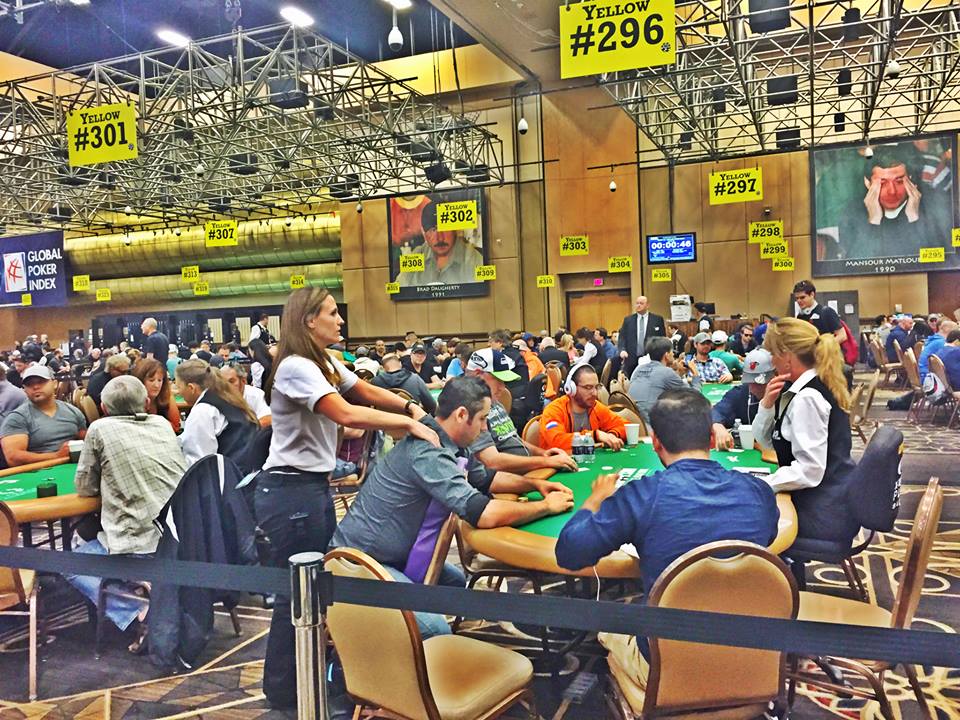 The massive Millionaire Maker Day One crowds, seen here, have now dwindled down to just 17 players, with a winner to be decided today. (Image: CardsChat.com exclusive)

With just 17 players remaining from a field of 7,275, there are still several notables in contention for the Millionaire Maker title.

None of them are doing better than Erick Lindgren, as the two-time bracelet winner currently sits in second place in the chip standings.

You don’t have to look much farther down the board to find other names that most poker fans will know. Olivier Busquet is in fourth, Mike Sexton is in sixth, and Andrew Lichtenberger is holding on with a short stack in 16th place.

The Millionaire Maker is scheduled to wrap up on Tuesday, and that seems likely. However, it could be a long day for the last few players as they chase the $1,277,193 first place prize.

Another tournament that could potentially award a bracelet on Tuesday (though this one could spill over into a Day 4) is the $3,000 Limit Hold’em Six-Handed event. Bracelet winner Keven Stammen is currently in the chip lead with 22 players remaining in the running for a $230,799 payday.

Like the Millionaire Maker, this tournament sees plenty of big names heading into what could be its final day. Brian Hastings, David Chiu, Ronnie Bardah, and Gabriel Nassif are just a few of the more recognizable faces that are still hunting for a bracelet on Tuesday.

The $10,000 Omaha Hi/Lo Championship event is another one of those tournament that you’d expect to draw a small but deadly field, and it hasn’t disappointed. Only 157 players are taking part in the contest, but they include some of the world’s best.

Tom Schnieder has the chip lead at start of day, while Josh Arieh, Anthony Zinno, and Shaun Deeb are some of the players who will enter Day 2 in the top ten in the chip counts, and there are plenty of other scary names not far behind them.

Meanwhile, in the $1,500 No Limit Hold’em event, it was Valentin Vornicu who jumped out to the lead at the end of Day 1. Vornicu has already cashed twice at this year’s WSOP, and is a six-time WSOP Circuit winner, with his latest triumph coming just last month at Foxwoods. 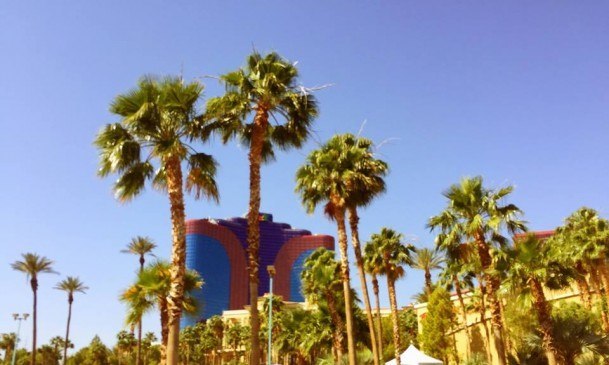 With poker celebrities everywhere and more bracelets coming down the pike, it promises to be another great day at the Rio in Las Vegas, Nevada. (Image: CardsChat.com exclusive)

With four events underway and two of them potentially awarding bracelets today, there will be plenty to keep your eye on at the Rio on Tuesday. But there are also two smaller buy-in events starting up during the day to add to the action.

First, there’s a $1,000 No Limit Hold’em tournament that will pick off at noon, which you would expect to draw a pretty good field.

However, don’t look for any record-breaking numbers: the Tuesday start and the fact that it is running without the fanfare of the Colossus or Millionaire Maker means that there won’t be hordes of recreational players signing up to play.

Then, at 4 pm PT, the $1,500 No Limit Deuce-to-Seven Lowball tournament will begin. One of the great things about the WSOP is the fact that virtually all forms of poker are represented, and the now-standard practice of having both $1,500 and $10,000 events in each format ensures that you don’t have to be a high roller anymore to play some of these lesser-known games.

Well done to “the brat” nice to see him still winning, even though it isn’t the Main Event!!!