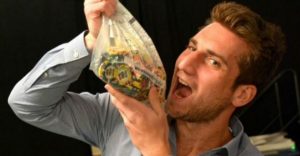 The World Series of Poker (WSOP) Main Event final table is almost upon us and as the clock counts down, the final nine are starting to count their chips and plan their strategies.

Knowing that there’s a potential $7.6 million on the line for the overall winner, the likes of Federico Butteroni have sought out the help of professionals such as the great Phil Hellmuth.

Announced in a recent video released by 888poker, Hellmuth will be Butteroni’s official coach for the final table.

Butteroni to Learn from Hellmuth

Despite holding only 16 big blinds ahead of his November 8 final table appearance, Butteroni is hopeful that he can overturn his shortfall and become Italy’s first ever Main Event winner.

According to Mr. Hellmuth, Butteroni will travel to Manhattan a week before the WSOP final table and spend five days drinking from his font of knowledge.

On top of that, Butteroni will also have a chance to test out his newfound skills in a charity poker tournament organized by Hellmuth.

Although Hellmuth wasn’t prepared to divulge what he’d be teaching the young Italian, he did state that his protégé thinks along the same lines as he does when it comes to poker and that should make him a threat in the finale.

As it stands, Butteroni has just over 6 million chips, which makes him the shortest stack in the final nine.

However, with the Patrick Chan boasting just 500,000 chips more and a double up for Butteroni enough to put him ahead of Josh Beckley, there’s every chance the Italian could challenge for the title.

Italy Hoping for a WSOP Win

Unfortunately, in terms of experience, the 25-year-old is one of the least qualified players on the final table. His two previous cashes at the WSOP both came this year; however, one of those was a 20th place finish in the Monster Stack.

If Butteroni does want to claim the WSOP Main Event title and become a hero in his home country, he’ll have to topple the in-form Joe McKeehen.

The 24-year-old American already has eight WSOP cashes under his belt and currently has $820,000 in tournament earnings.

Alongside these credentials, the young player has 160 big blinds and more than 30 million chips more than his closest rival, Ofer Zvi Stern.

Whether or not Hellmuth’s coaching can help Butteroni clinch the WSOP Main Event title remains to be seen, but it will be interesting to see how the Poker Brat responds to his protégé’s actions during the finale.