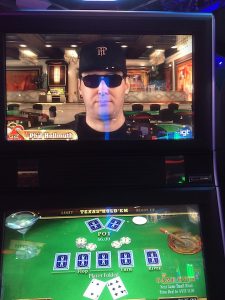 Phil Hellmuth and Johnny Chan have sold the rights to their likeness for a new video poker machine which debuted at the Global Gaming Expo (G2E) in Las Vegas last week. (Image: vegaschatter.com)

Phil Hellmuth and Johnny Chan have signed on to have their likeness appear in a new IGT Texas Hold’em Heads-Up Video Poker machine, unveiled at the recent Global Gaming Expo (G2E) in Las Vegas. Both Hellmuth and Chan are two of the game’s most iconic players, boasting millions of dollars in live tournament earnings, and each with at least one WSOP Main Event bracelet.

The Global Gaming Expo is a yearly ordeal held at the Sands Expo and Convention center in Las Vegas. This year’s show was held from September 23-26, and showcased 455 companies from many different segments of the gaming industry. The goal of the convention is to get companies together to show off new technologies and conduct business to enhance the gaming experience for players around the world.

Phil Hellmuth and Johnny Chan made their appearance at the show, surprising those in attendance who did not expect to see two of the game’s all-time best. They were both representing International Game Technology (IGT), which debuted a new set of Texas Hold’em Heads Up Poker machines. Both Chan and Hellmuth appear in the game, staring at players on a second screen, purportedly “talking back” to players before, during, and after hands, much as they would in real life.

About Texas Hold’em Heads Up Poker

The machine was built on the result of billions of hands of poker being run on complex neural nets playing against each other. This means that the game’s artificial intelligence purportedly plays back at players using sophisticated game-theoretical optimal strategy, rather than just playing the odds, specific to heads-up poker.

There are approximately 200 machines live today in Nevada, Mississippi, and California. Those in Las Vegas can find the new Chan-Hellmuth machines at the Aria, MGM Grand, The Palazzo, and The Bellagio. This new edition featuring Hellmuth and Chan comes two full years after the company debuted their initial run.

About Hellmuth and Chan

Phil Hellmuth is the current record holder for the most World Series of Poker (WSOP) bracelets with thirteen. He has 50 WSOP final tables and won the WSOP Main Event in 1989. He also has four World Poker Tour (WPT) final tables to his name. As of 2014, Hellmuth has won over $18 million in live tournaments and ranks seventh on the all-time money list. His most recent WSOP bracelet game in 2012 at the WSOP Europe No Limit Hold’em Main Event, when he won €1,022,376 ($1.27 million USD).

Johnny Chan is one of poker’s iconic players and has won an astounding ten World Series of Poker bracelets and has appeared at 27 final tables. Like Hellmuth, he has yet to win a WPT event. Chan is one of the very few elite who can brag back-to-back WSOP Main Event titles, having done so in 1987 and 1988. It has been a while since Chan has tasted tournament success at the World Series of Poker, with his last bracelet coming nine years ago in 2005.

Does the helmuth machine blow up if it takes a bad beat, or berate your play if you so much as attempt to play back at it?