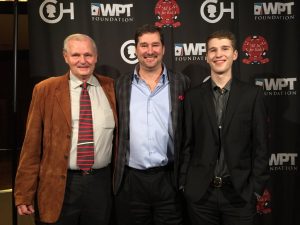 Dan Shak’s All In for Kids Poker Tournament helps to raise $700,000 for The Children’s Hospital of Philadelphia. (Image: Twitter/@phil_hellmuth)

Phil Hellmuth, Dan Shak and the WPT have once again shown their benevolent side by lending their support to the latest All In for Kids Poker Tournament.

Held on behalf of The Children’s Hospital of Philadelphia (CHOP) and the World Poker Tour Foundation, the tournament welcomed 275 poker players, business tycoons and celebrities all intent on raising money for a good cause.

In addition to those in attendance, the Gitlin Family Foundation also lent its support to the event held inside the Mandarin Oriental, New York.

As expected, Hellmuth provided a mixture of poker performances and commentary, but helping to keep the Poker Brat, as well as the other pros in attendance, in line was WPT commentator, Lynn Gilmartin.

Working as host, as well as player, Gilmartin helped to bring a sense of occasion to the tournament and even managed to reach the final table before hitting the rail in eighth place.

While Gilmartin was left to hold court on the rail, Hellmuth and Shak continued their march towards the winner’s trophy. Unfortunately, despite getting extremely close, neither Hellmuth nor Shak could walk away as the winner.

That honor went to the co-founder of Cibeles Capital Advisors, Antonio Rodriguez.

Although taking the plaudits and beating the pros was an accomplishment for Rodriguez, the main aim of the evening was to raise money for CHOP’s Division of Gastroenterology, Hepatology and Nutrition.

After counting up the buy-ins and contributions made throughout the evening, the organizers announced this week that a total of $700,000 was raised for the charity.

Despite being less than last year’s total ($925,000), the haul was still impressive and yet another sign of the poker community’s benevolence.

“In three years with The Children’s Hospital of Philadelphia, WPT Foundation has proudly helped raise more than $2.3 million to help CHOP provide the most advanced child healthcare available,” said the WPT’s CEO and President, Adam Pliska.

In addition to helping bring some much needed attention to the charity event in New York, Hellmuth also took part in a charity event in Chicago before heading to Vegas to help Daniel Negreanu raise money for St Jude’s Hospital.

After returning home and counting up his contributions to charity the poker pro tweeted out that he’d helped to raise more than $2.5 million for worthy causes.