What to Expect from Hellmuth vs. Negreanu Round 2
April 7, 2021 Opinion

What to Expect from Hellmuth vs. Negreanu, Round 2

Phil Hellmuth and Daniel Negreanu are set to face off again on May 5 on the PokerGO show High Stakes Duel II. The rematch will likely play out differently than Round 1, but that doesn’t mean we’ll have a new winner. 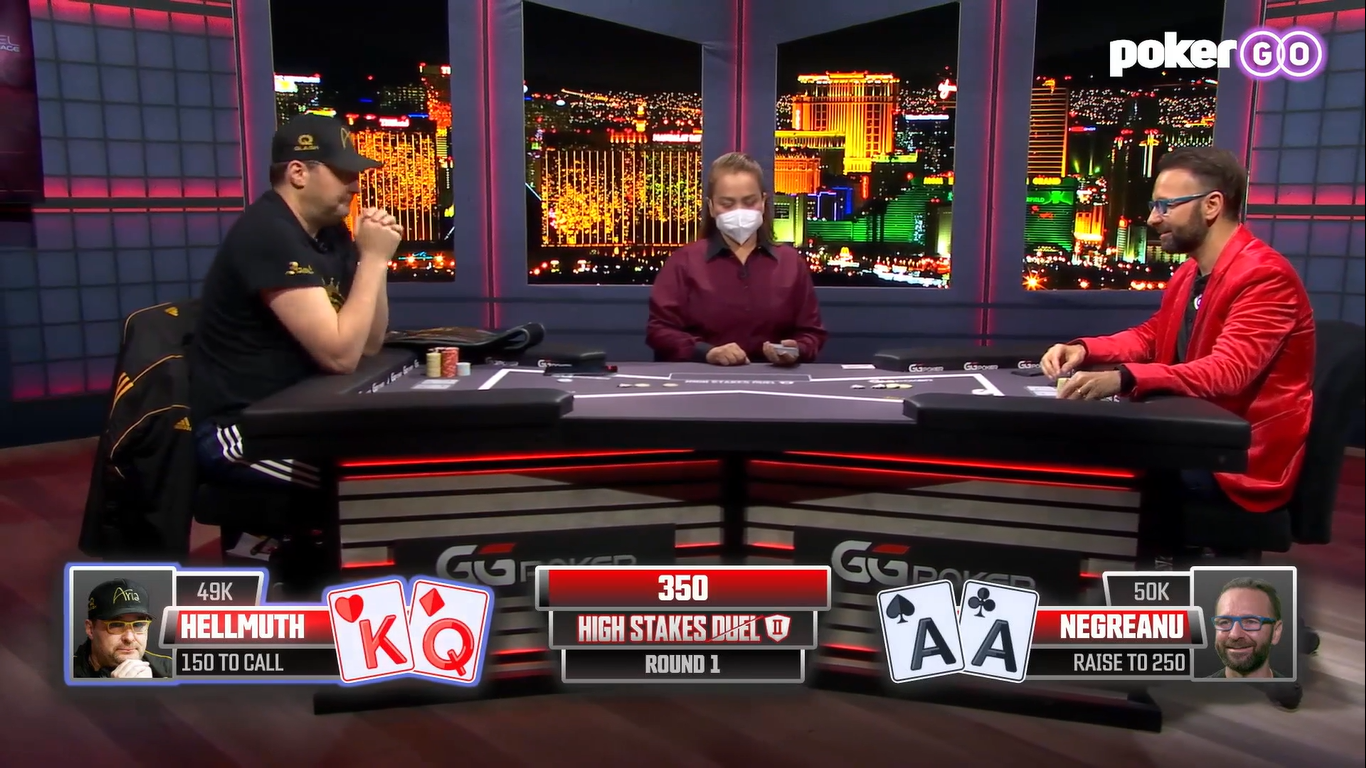 Phil Hellmuth and Daniel Negreanu are set to continue their heads-up battle on May 5. (Image courtesy of High Stakes Duel on PokerGO)

In the first match, which took place March 31 at the PokerGO Studio in Las Vegas, Hellmuth won the $100,000 prize pool ($50,000 buy-in each) thanks to a miraculous comeback. At one point in the game, he had just 3,000 of the 100,000 chips in play. But he’s one of the best ever at maneuvering a small stack, and for the umpteenth time in his career, rallied to win.

Round 2 will have the same sit-n-go style format in the same venue, but this time around, the stakes are being raised to $200,000. Only Negreanu is required to ante up because he lost the first match, and must pay $100,000 to take on Hellmuth again.

When you’re down 97,000 to 3,000 in chips, no matter how skilled you are, you need some serious luck to pull out a victory. Even if you doubled up in four consecutive hands, you’ll still be at a slight disadvantage. If Hellmuth gets too far behind this time around, he’s likely going to lose.

In terms of style of play, Hellmuth is Hellmuth. He’s openly against adapting to modern poker strategy and even admitted heading into the first session that he won’t do much preparation for Negreanu. His philosophy toward poker is similar to University of Alabama head football coach Nick Saban, who knows he has the most talented team every year. Saban doesn’t change up his style of play based on his opponent. Instead, his strategy is to run the same type of game plan against every team and, if the opponent is good enough to beat them, so be it. But that rarely happens.

Hellmuth’s mindset is similar. He uses what he dubs a “White Magic” poker style, which focuses on exploiting opponents based on his supposed live reads. That’s how he’s played for many years and you shouldn’t expect that to change for the upcoming match, or any match, for that matter. If his opponent can beat that strategy, then so be it (although he usually complains when that happens).

We know how Hellmuth is going to play. He’s going to make some questionable laydowns and patiently await the perfect opportunity to double up on a big hand. Negreanu, on the other hand, might just show up with a few tricks in his bag.

Negreanu’s poker studies in recent months have focused on GTO and on exploiting an opponent’s weakness. So, unlike Hellmuth, he is likely to have a slightly different game plan than he did in Round 1. Perhaps, he’ll show more aggression on boards where he’s missed, whereas in Round 1, he rarely fired a triple-barrel bluff.

If Negreanu is more aggressive this time around, it’s likely that the rematch will be a quicker session, one way or the other. It took six hours of back and forth play to wrap up Hellmuth’s Round 1 win. Don’t expect a repeat on May 5.