If you don’t have a hot date on Friday, just stay inside and catch the “Live at the Bike” high stakes cash game episode featuring Phil Hellmuth and Mike Matusow. The eight players at the table own a combined 24 WSOP gold bracelets. And you can rest assured chips will be flying around the table. 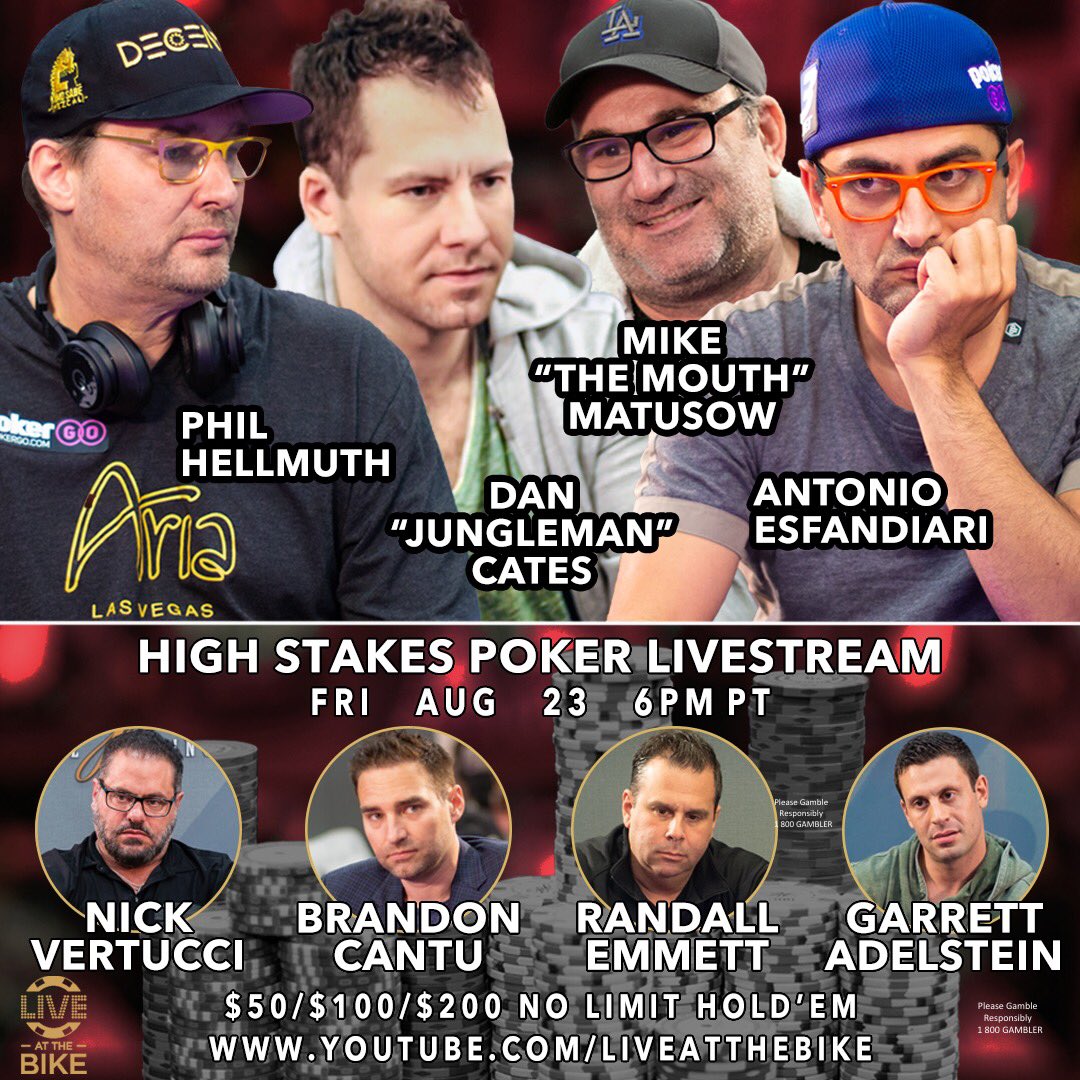 If this lineup doesn’t excite you, you just don’t love poker. (Image: Live at the Bike)

Play from inside the Bicycle Casino kicks off at 6 pm PT. You can catch the entire session live on Twitch and also YouTube. Blinds are scheduled for $50/$100/$200 But with an action-heavy lineup such as this, don’t be surprised if the stakes increase throughout the evening.

“Live at the Bike” is the most popular live-streamed cash game show. It airs Monday-Friday each week. Friday episodes typically feature high stakes games and the top players.

Who’s at the Table?

Friday’s session features a solid mix of entertaining and talented pros and also some charismatic recreational players. Phil Hellmuth apparently chose the lineup, and Mike Matusow isn’t all that ecstatic about some of his choices.

Well I was supposed to have a seat in this game with my good friend @phil_hellmuth who picked the linup! But ended up with seat in game on right! And he wants to know why he wins and im broke! #unfair pic.twitter.com/H2NosZjGtS

Hellmuth will also compete on “Poker After Dark” on Wednesday and Thursday night. That game features mostly recreational players such as former NBA star Paul Pierce and actress Jennifer Tilly. Pros such as Matusow prefer competing against recreational players as opposed to other pros as it’s more profitable.

But the Friday night “Live at the Bike” show also features some less-than-stellar players such as the controversial Randall Emmett, a Hollywood producer who many poker fans on Twitter don’t want to watch play. Emmett, who clearly likes to hear his own voice, was forced to pay off a $1 million debt recently to rapper Fofty Cent, otherwise known as 50 Cent.

There isn’t a single player at the table who is afraid to play big pots. The players have a combined 24 WSOP bracelets and over $72 million in live tournament cashes. But these players are also rather talkative and entertaining which should make for a fun show. If you don’t find this lineup exciting, you either don’t enjoy poker or don’t have a pulse.