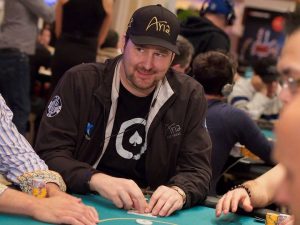 Phil Hellmuth is a man of his word, except when he isn’t.

The “Poker Brat” had agreed to coach Federico Butteroni in preparation for the 2015 WSOP Main Event final table. As it turns out, Hellmuth would rather have a free dinner.

Hellmuth told his Twitter followers he is unavailable to coach Butteroni.

The pair had planned to meet in New York City for five intense days of poker training.

Hellmuth recently said he has a commitment to ESPN and won’t be able to coach the bracelet hopeful.

The 14-time bracelet winner shared general details about why he won’t be coaching Butteroni, on Twitter.

“1) Frederico Butteroni has a great story and I was looking forward to coaching him for @WSOP November Nine, but I owe him 100% and…

(2) …I have a previous commitment to the LIVE @WSOP Coverage on @ESPN.  It became obvious that I couldn’t coach Frederico and do @ESPN

(3) thus I will not be coaching Frederico in @WSOP November Nine, but it will be fun to root for this nice guy w such a great story!

(4) and I expect Frederico to buy me a amazing expensive dinner after he wins the @WSOP Main Event!  Good Luck Frederico!”

When the remaining nine players in the 2015 WSOP Main Event hit the felt on November 8, Federico (not “Frederico”, Phil) will have the smallest stack.

Therefore, many poker players questioned the purpose of Hellmuth coaching Butteroni. The play for Butteroni, at least early on, is standard.

Skill won’t be much of a factor unless he is fortunate enough to double-up before his chick stack dwindles down to nothing.

So why spend time coaching a player with such a small stack?

That part is unknown, although Hellmuth did mention on Twitter Butteroni has a great story.

Perhaps Hellmuth is simply fascinated with Butteroni, but the odds are stacked against Butteroni even with the coaching from the man that holds the record for most WSOP bracelets.

The Pride of Italy

No Italian-born player has ever won the Main Event, but Butteroni would love to change that.

The 25-year old is the second November Nine participant to hail from Italy. In 2010, Filippo Candio finished fourth.

Becoming the first ever Main Event winner from Italy isn’t the only accomplishment Butteroni is chasing. Should he finish in the top two, he will surpass Max Pescatori as Italy’s all-time career live tournament winnings leader.

A victory by Butteroni would be well received in his homeland. Poker is a popular game in Italy, so he will have the entire country cheering him on.

Unfortunately, the odds are stacked against him, even if the Poker Brat stuck to his word and coached him. However, this is poker, a game where anything can happen on any given day.

There is still skill in knowing what spots you gotta be shoving on and what hands you should be doing it at a certain stack size. The thing is, Hellmuth is not the right guy to get Shirt Stack coaching from. That’s for sure.