Phil Galfond didn’t need to pull off miraculous comeback to win his second Galfond Challenge. This time around, he grabbed an early lead against his opponent, “ActionFreak,” and held on until the 15,000-hand match concluded. 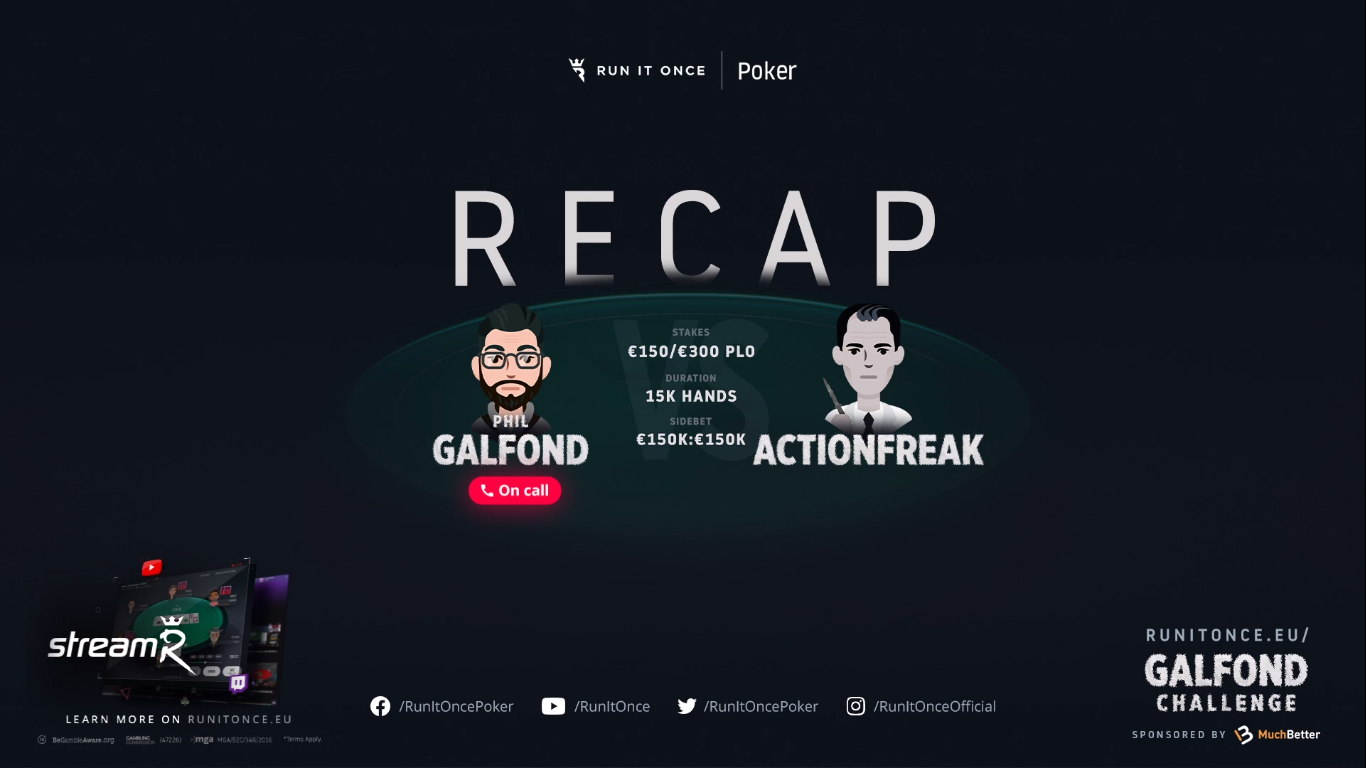 Phil Galfond is 2-0 in the Galfond Challenge. (Image: Twitch/Run it Once Poker)

The Run it Once founder is widely considered to be one of the best Pot-Limit Omaha players in the world. He’s solidified that reputation yet again over the past couple of months.

In his first challenge, a 25,000-hand competition against “VeniVidi1993,” Galfond erased a €900,000 deficit to win by a small margin. He then took on a second Galfond Challenge against another online pro, “ActionFreak.” Things went a bit smoother in this match for the PLO legend, although it certainly wasn’t easy.

Galfond didn’t play his best game during Tuesday’s final session against “ActionFreak,” but much of that was by design.

Players Change it Up in Final Session

Galfond entered the challenge finale on Tuesday — Day 20 — with a sizable lead of nearly €240,000. With only 881 hands left to play, the poker site owner had to adjust his game plan. Turning a profit in the €150/€300 heads-up PLO cash games wasn’t the only thing he was playing for. Bragging rights and a €150,000 side bet were also on the line.

Going into the finale, Galfond knew he couldn’t play his normal game. Doing so, if he were to run bad, could put his potential title in jeopardy.

“I had such a big lead going into yesterday, and yesterday went about as bad as it could have,” he told Jamie Kerstetter in his post-game interview on Twitch. “I still went into today with enough of a lead where there was really no real chance of losing the challenge because I can start off playing relatively normal, which is what I did. And then, if I lose a few buy-ins, just keep the pots small, which is unfortunately what I had to do.”

Galfond explained in the interview that he limped some buttons pre-flop instead of raising, which is his standard play, because he was attempting to keep the pots small. The pressure was on “ActionFreak” to make a run, given that he was down approximately eight buy-ins heading into the final session.

The former Full Tilt Poker star booked his second consecutive six-figure losing session on Tuesday, dumping €123,000. But successful run on Days 19 and 20 weren’t near enough for “ActionFreak.” Galfond ended up winning the Galfond Challenge by approximately €114,000.

Kerstetter asked the champion which of his first two competitors is a better PLO player. He gave the politically correct answer, as he often does.

“I guess I don’t know. Well, I think I have an opinion, but I don’t want to say. They’re both excellent players. So, even saying one is better than the other is not really a slight to the other. But I’d prefer not to.”