Back and forth we go in the Galfond Challenge. Phil Galfond, bounced back from two straight losses to book a much-needed win on Day 38 over “VeniVidi1993.” He now trails by just half a buy-in heading into what figures to be the final session of this epic high-stakes, Pot-Limit Omaha competition. 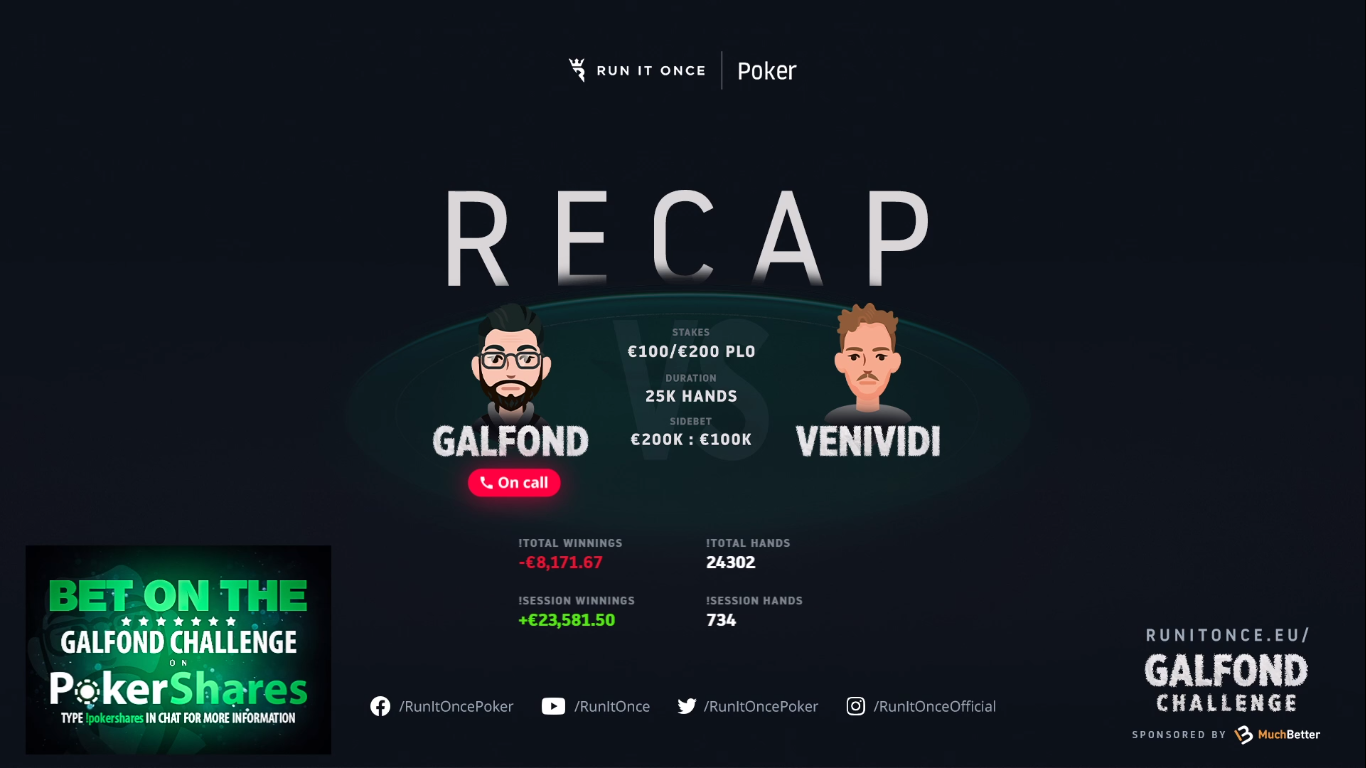 We’re getting down to the nitty-gritty in the first Galfond Challenge. (Image: Twitch/runitoncepoker)

If you haven’t been following the match, what are you waiting for? Live poker is currently taking a break due to the coronavirus pandemic. So, if you’re craving some intense poker action, tune in to Twitch on Sunday to catch the finale of the first Galfond Challenge.

It’s certainly been a thrilling competition between two incredibly talented PLO pros. “VeniVidi1993,” whose identity isn’t publicly known, jumped out to a €900k lead in February. But the Run it Once poker site founder bounced back and actually took a brief but sizable lead. His opponent regained the advantage earlier this week. Down to the final session and it’s anyone’s guess as to who is going to win.

Galfond Challenge Day 38: From Red to Black in No Time Flat

Day 38 of the Galfond Challenge on Friday wasn’t going well for Galfond. Throughout most of the five-hour session, he trailed. It wasn’t until late in the day when he went on a bit of a heater to finish in the black for the session.

Galfond and “VeniVidi1993” are playing 25,000 hands of €100/€200 PLO at Run it Once. After all the hands are complete, the loser will pay the winner a six-figure side bet. On Friday, the fierce competitors played 734 hands, leaving just 698 hands left to play.

Get Ready for an Exciting Finish

It appears the first Galfond Challenge is going to come down to the wire. On Sunday, the two competitors will return to the virtual felt for one last match, and Galfond must turn a profit of at least €8,172 or he loses the challenge. You can watch the finale live on Twitch (@runitoncepoker) Sunday morning beginning at 8 am PT.

Chance Kornuth joined Joe Stapleton in the broadcast booth for Friday’s session. Kornuth was in an interesting position in that role, given that he will soon take on the Run it Once poker site owner in an upcoming challenge. But he said in the post-game interview with Galfond that even he is rooting for the completion of the epic comeback. He asked his future opponent what changes he made to his game during his month-long break in February.

“I think my game didn’t change as much as it appeared,” Galfond responded. “I stopped playing far too loose pre-flop, as I was trying to run him over in the early going. My (bet) sizings were pretty big and he played pretty well against that. I decided to tone down (my aggressive betting).”

Way to go Phil, I’m sure you’ll read my post and just want to wish you good luck fort the final stages, of the challenge.

P.s If you want to play some PLO tourneys, I know a Home Game you are welcome to join, and as we play online, no need for social distancing, we’ll be in separate countries, just to make sure.

Well done on the comeback, and in your position compared to a few days ago, I’d be happy to be so close.