Phil Galfond continues watch his once massive lead in the Galfond Challenge against “ActionFreak” decline. He posted another losing session on Tuesday. And if the current trend continues much longer, he’ll soon be facing a deficit. 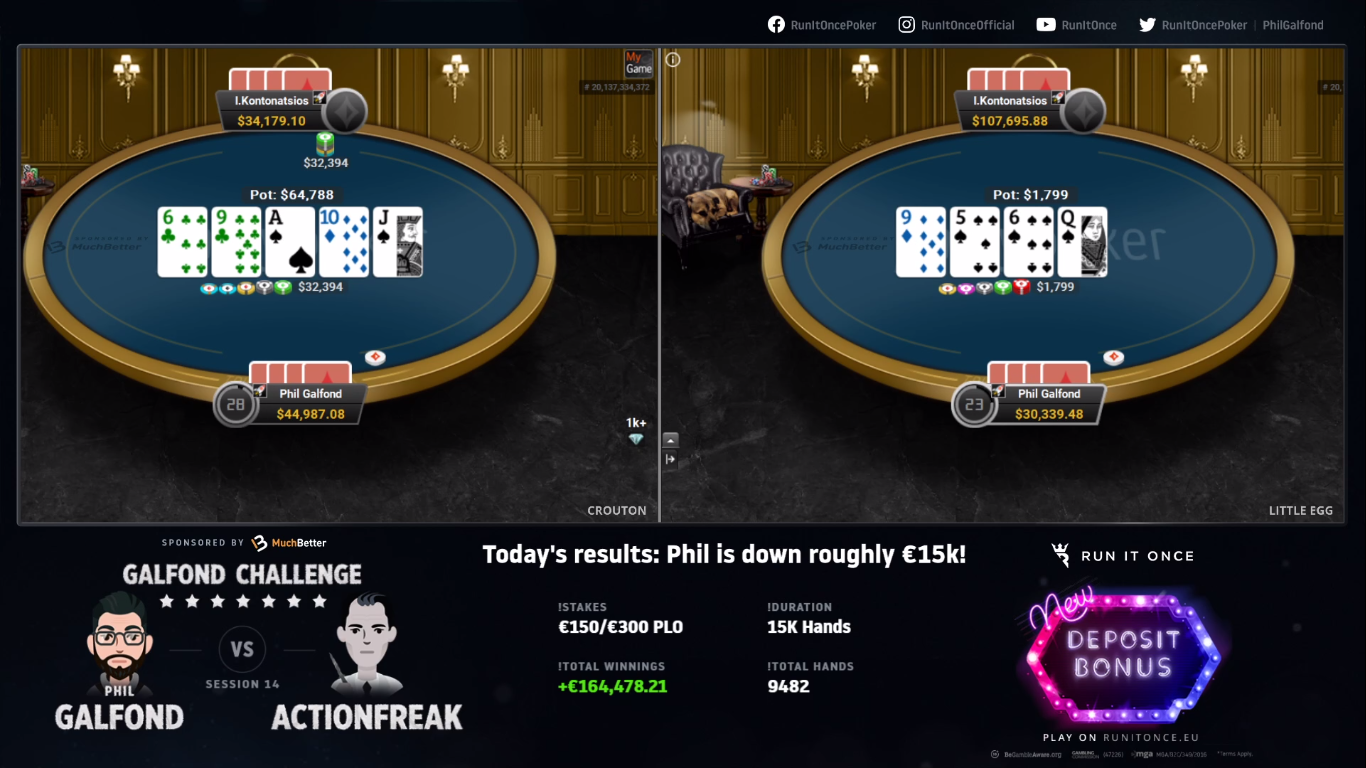 “ActionFreak” is pulling off an impressive comeback in the Galfond Challenge. (Image: Twitch/Run it Once Poker)

All Galfond Challenge sessions are available to watch live on the Run it Once Twitch channel. The most recent session was the third winning day out of the past four for “ActionFreak,” an online pro from Greece.

Galfond and “ActionFreak” are competing in a 15,000-hand high-stakes pot-limit Omaha competition (€150/€300 stakes). The challenge began on Galfond’s Run it Once site but switched over to Partypoker last week due to “ActionFreak” having issues funding his RIU account in time.

If you’re new to PLO, you may not understand the high-variance nature of the game. There are so many swings that PLO pros go through during their playing careers. During Galfond’s first challenge against “VeniVidi1993,” he trailed by €900,000 at one point and then rallied to win on the final day of the 25,000-hand competition.

This time around against “ActionFreak,” the tables have turned a bit for the poker site owner. Galfond led by around €430,000 after winning €165,000 on Day 8. Just six sessions later and that lead is down to €103,341. He’s still in a better position than his opponent with 4,778 hands remaining. But the run-good has been on “ActionFreak’s” side since the challenge moved over to Partypoker.

The good news for the Run it Once founder is he still has a sizable advantage. He leads by the equivalent of more than three full buy-ins with over 2/3 of the Galfond Challenge completed. So, he’s still in the driver’s seat. But one bad session could change that all.

Galfond and “ActionFreak” have agreed to a €150,000 even-money side bet awarded to the winner. That side bet is on top of the profits earned by the winner during the challenge. They’ll be back in action on Thursday with Day 15 of what is turning out to be a competitive battle between two talented PLO players.