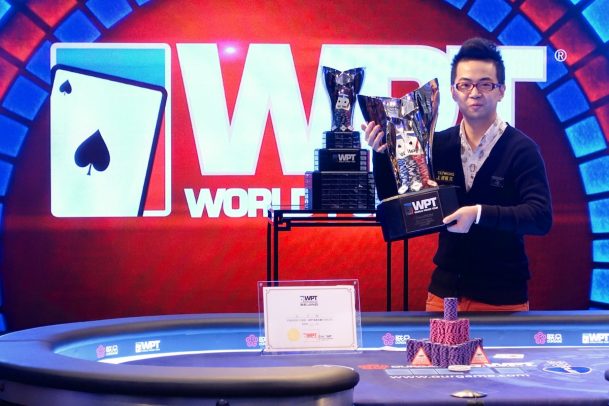 Pete Chen won the first event of the WPT’s first event of Season XVI for $299,485 and a $15,000 seat into the season-ending Tournament of Champions. (Image: WPT)

The WPT Beijing win saw Chen, a poker pro for nine years now residing in Macau, bring his lifetime earnings up over $1 million, which moved him into third on Taiwan’s all-time money list. Chen, whose prior best cash was $90,712 for finishing sixth in the PokerStars Championship Macau Main Event two weeks ago, began the final table with half the chips in play, and he never relinquished the lead.

Fourteen hands later, Wenbin raised to 110,000 from early position and Tan Yancheng defended the big blind to see a 9♠4♠3♦ flop. Tan moved all in for 375,000 with the 6♠2♠ for straight and flush draws, and Zhang quickly called with his A♥A♣. Neither the 7♣ turn nor 4♣ river helped Yancheng, and he became Wenbin’s second victim.

Wenbin got off to a hot start, but he cooled off during four-handed play and wound up as Chen’s first casualty. It happened on Hand #79 after Wenbin got his chips in holding pocket queens, only to fall to Chen’s king-jack after a king appeared on the flop.

With his WPT Beijing win, Chen became the first-ever champion of a WPT main tour event in China, and by default took the lead in the Season XVI Hublot WPT Player of the Year race. He also received a championship ring, will have his name etched on the WPT Champions Cup, and a seat into the Tournament of Champions, which just wrapped up its Season XV finale.

The WPT will now head to Holland Casino in Amsterdam for an event to be held May 5-13.