Pennsylvania Could Agree to Legalize Online Poker before End of Week (Then Again, it Might Not)
December 8, 2015 Latest Poker News

Pennsylvania Could Agree to Legalize Online Poker before End of Week (Then Again, it Might Not) 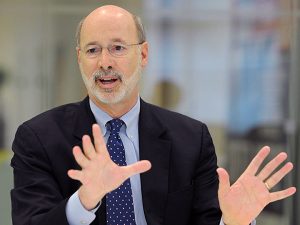 Democrat Governor Tom Wolf: Is Pennsylvania about to legalize online poker as part of its budget plan?

Pennsylvania’s push to legalize and regulate online poker and casino gaming hangs in the balance as the state’s five-month budget impasse appears to be finally be drawing to a close.

We say “probably” because the Senate plan includes no details on revenue generation, merely expenditures, so it’s difficult to know, although there is markedly less support for online gaming in the Senate than the House.

Nevertheless, the plan is five months overdue and lawmakers are anxious to rush things through.

And with the Senate plan proposing half a billion dollars more in expenditures than the House version, the revenue needs to come from somewhere.

The House, meanwhile, stipulates specifically that it would pay for its plan with $120 million generated by online gaming; $150 million in tobacco taxes and $24 million in one-off online gaming license fees.

These figures tally exactly with the fees proposed in the online gambling bill introduced by Representative John Payne, HB 649, which was approved by the House Gaming Oversight Committee last month.

It is unknown, of course, whether the House plan is proposing to adopt HB 649 in its entirety, or merely aspects of it.

The bill itself is wide-ranging in its objectives, covering not only the regulation of online poker and casino gaming, but also land-based gaming expansion, including the sanctioning of slots at airports and the creation of 24-hour liquor licenses for casinos.

Looking specifically at online poker, HB 649 is very much for interstate liquidity sharing.

This means that were Pennsylvania to establish a regulated market, it would be the most populous state to do so yet, which could be a huge boost to liquidity in the US further down the line.

Pennsylvania’s Democrat governor Tom Wolf has declared himself to be “open to a discussion” about online gambling, although he remains reserved on the subject. Wolf has thrown his support behind the Senate plan, which is more in line with his ideas about expenditure.

In order to be signed off by the governor one of the plans would need to be agreed by a majority vote of both House and Senate, and despite the gulf between the two pieces of legislation this needs to be done as soon as possible.

Republican Senate Majority Leader Jake Corman, however, told NBC Philadelphia that he didn’t believe there was there support in the Senate for the House’s proposed gambling expansion.

“We don’t have the votes for it,” he said. “I mean, that’s just plain and simple that won’t happen.”

However, the question of how the Senate is going to fund its expenditures remains.