PCA Main Event Down to Six 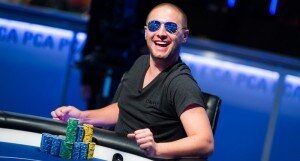 Chance Kornuth is the big stack heading into Day 6 of the PCA Main Event. (Image: highstakesdb.com)

The 12th annual PokerStars Caribbean Adventure (PCA) Main Event is down to the final six after 18 players busted on Day 5.

Kornuth has built-up a resume over the years, taking more than $1.7 million in cashes and claiming a WSOP bracelet in 2010.

However, winning the PCA Main Event would unquestionably be the biggest win of his career.

Kornuth began the day as a commanding big stack at table 2, but got off to a horrendous start by losing 974,000 chips just an hour into play.

After being held in the middle of the pack for several hands, Kornuth rebounded off Jim Collopy’s all-in shove, topping his opponent with pocket aces.

Throughout the day, Kornuth expanded his chip lead by playing aggressively before the flop.

The strategy paid off, giving him 110 big blinds at one point, with his nearest opponent at just 45.

Juan Etcheverry, who led the final 57 heading into Day 4, was eliminated in 17th place after two difficult days.

During Level 25, Etcheverry called a 550K all-in move by Rami Boukai with K of clubs and Q of hearts.

After the board gave him nothing, the former big stack was down to just 120,000 chips.

The very next hand he would bust when he moved all-in with K of diamonds and J of spades. The board once again gave him nothing.

While EPT events are typically played eight handed at the final table, organizers this year decided to drop down to six, probably a good idea considering last year’s event finished at 5:00 AM local time.

With a fairly inexperienced final six, and prize payouts ranging from $285,740 to $1,491,580, the 2015 PokerStars Caribbean Adventure Main Event will undoubtedly be a live-changing experience for not just one, but a half-dozen players.