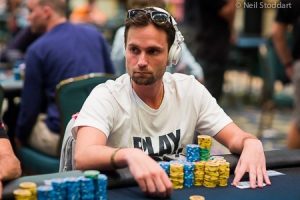 The PokerStars Caribbean Adventure (PCA) Main Event moves into Day Four today, and no one needs to cry for Argentina.

Argentina’s Juan Etcheverry was the chip leader at the end of Day 3 of the PCA Main Event, in a field that has just 59 players remaining. The $10,000 buy-in tournament boasts a whopping $7.9 million prize pool, whose winner will take home $1.49 million.

Day 3 at the PCA saw 175 players start the day, but after eight hours of play, just 59 of them would remain.

The story of Day 3 was the big stacks, which seemed to do nothing but gain steam and garner more chips as the day wore on. After everything was said and done, Argentina’s Juan Etcheverry was the chip leader, with 1.7 million in chips, which represents 213 big blinds.

He made waves at the PCA by winning a pot worth more than a million chips at the final level to take the lead. Up until that point, it had been Kevin Shultz making headlines, along with Chance Kornuth, looked at as the odds-on-favorite to win. Both players, who hail from the United States, have identical 1.165 million chip stacks heading into Day 4.

Others Players Make Names for Themselves

While Shultz and Kornuth, along with Etcheverry, were big names, there are others to keep tabs on today.

Juan Martin Pastor, who is a Supernova Elite player on PokerStars and also from Argentina, was the first player to a million chips, but slipped to 930,000 when the day ended, which was good for fourth in chips.

Here are the players and their chip stacks at the end of Day 3 going into Day 4 of the PCA Main Event:

Bubble Burst Made for Great Drama

The biggest story heading into Day 3 was the bubble, which was estimated to burst about mid-way through play, with the 120th player elimination.

Eventually, that would mean that shortstacks (and nits) would have to endure almost three levels of play. When play went to a hand-for-hand format when the tournament was two away from the money, there were a series of double-ups that made for good drama.

Eventually Arne Kern was the bubble boy and was sent to the rail, making 119 players extremely happy. One of the better stories of bubble play was Elizabeth Bennett-Martin, who had just two big blinds at bubble time and had endured many all-ins prior to making the money. She doubled up after the first hand of play subsequent to the bubble and ended up in 65th place for a $24,140 payday.

Negreanu and Boeree Sent to the Rail

Daniel Negreanu had been making waves as he was enjoying a deep run in the tournament, but it didn’t end the way the pro wanted it to. He eventually was taken out in 94th place and told reporters that it simply “was a day where everything went weird” and saw his pocket jacks drive into a brick wall against pocket queens.

Liv Boeree, who hoped to win another title, lost a critical pot with aces and was eventually eliminated a short time later by John Patgorski. She finished in 73rd place for $20,580. Other notable in-the-money finishers include Andre Akkari, Bertrand “ElkY” Grospellier, and George Lind III.

Players will battle it out for another five levels on Day 4. Among all the tables that will see action today, Table 6 might be the most intruiging as it features not only the chip leader Juan Etcheverry, but also Ambrose Ng (6th in chips), and Carter Swidler (12th in chips).