PCA 2015 Kicks Off with Super High Roller and Prop Bets 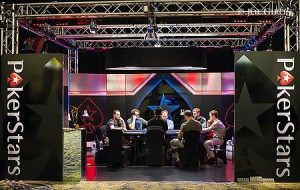 PokerStars Caribbean Adventure 2015 (PCA 2015) kicked off Tuesday in a big way. Where many tournaments gradually build up to massive action, Event #1 at the PCA 2015 was certainly a spectacle, with the $100,000 Super High Roller tournament.

Leading into Day 2, the Super High Roller tournament led to some record-breaking results and a few fun distractions for players trying to gain an advantage over each other.

Now in Day Three, as of this writing businessman Roger Sippl leads the way, and although not technically considered a pro, he might as well be, with over $2.5 million in live tourney cashes under his belt.

A $100,000 buy-in tournament means that some exceptional players were going to be taking each other on. Ole Schemion, Fedor Holz, Daniel Negreanu, Jason Mercier and Isaac Haxton were just some of the names dropping down some cash to have their shot at the prize.

Previously, the biggest Super High Roller event at any PCA had 59 entries. This time around, 48 unique players entered into 2015’s Day One action and 13 re-entries brought the total up to 61; Bill Perkins was the sole player to buy back in twice.

Though Day 1 set its fair share of records, Mike McDonald made the biggest splash for his off-table antics. After the first break of the initial day of the Super High Roller event, talk about fitness and air squats led Bill Perkins to challenge McDonald on how many air squats he could do. McDonald would receive $10,000 from Perkins if he could perform 300 air squats during the hour of Level 3.

With a little over 20 minutes left in the hour, McDonald reached his 300 squats and for good measure tossed in another 20. Perkins pushed McDonald again for an additional $10,000, wanting 350 push-ups from McDonald in the same span of an hour. Unfortunately, time ran out with McDonald only getting 323 in the required amount of time.

As the second day action went on, the final table came closer into sight. PokerStars pro Jason Mercier went bust and air squat master McDonald almost cracked the top ten but went out in 12th place. Schindler was shut out in ninth place for $185,660 with Scott Seiver being the last to go in eighth with $243,280.

Thursday will see the Super High Roller finale take place as the last seven players try to outwit each other for the big prize. Sorel Mizzi leads the pack with a stack of 4,800,000 and Day 1 leader Sam Greenwood with the smallest stack of 705,000.

The final table chip counts as of this writing are as follows: