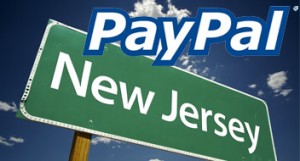 PayPal and New Jersey are in confirmed licensing talks to bring the payment processor to the Garden State. (Image: Pokerupdate.com)

PayPal and New Jersey regulators are currently in talks to bring the popular payment processor to the Garden State. The news comes on the heels of a report published just weeks ago that PayPal was looking to secure agreements in New Jersey and Nevada.

Both states have legalized forms of online gaming, but have been plagued by payment processing issues due to credit card companies refusing to accept gaming-based transactions. PayPal would solve all those issues and if the reports are to be believed, an agreement might be right around the corner in New Jersey.

Licensing Could Be Imminent

According to various gaming media industry reports published late last week, PayPal is close to inking processing deals with the state of New Jersey. Those reports are based on a tweet from Chris Krafcik, the research director at Gambling Compliance, Inc., who said, “#NewJersey DGE confirmed yesterday it was in licensing discussions with PayPal.”

Unfortunately for those in Nevada, the same tweet brings some sour news, “…#Nevada GCB said PP is not currently a license applicant.” It might be that PayPal is looking for legal footing with the largest potential customer base first and will then turn its attention to the Silver State. When PayPal and the state authorities ink the agreement, it will be the first time in 10 years that the company has accepted online poker payments in the United States.

While New Jersey has had limited success with their rollout of online poker in Year One, many have pointed to the numerous issues both poker sites and players have had with payment issues as the top reason expected growth hasn’t been realized. Currently, players and poker sites are often getting their payment requests denied by banks that issue credit cards because those financial institutions might be at risk for federal liability. Since there are no federal laws regarding online gaming in the United States and only state laws, credit card companies are simply unwilling to be cooperative because of legal liability. Adding PayPal to the virtual poker market in New Jersey would remove that roadblock for players and poker sites altogether.

The impact PayPal would have is expected to be substantial. The popular company, which is a wholly owned subsidiary of eBay, has its headquarters in San Jose, California and has approximately 50 million users. The service would allow players to load money on PayPal via a bank account transfer or credit card and then use that balance to load their poker accounts. The reverse would theoretically be true as well, as players could withdraw from their poker accounts and into PayPal, then be able to transfer the money into their bank accounts.

History of PayPal in US Gaming

PayPal is not without its history in the poker industry in the United States. It used to be that PayPal was the single most-used payment provider for online financial transactions for poker players. Once the legal atmosphere became hazy in 2003, PayPal made the decision to leave the global online gaming industry, which opened the door for other payment processors, such as Neteller and Skrill (once called Moneybookers), to dominate the landscape. In 2010, PayPal made the formal decision to jump back into the gaming space for real money transactions, but only in jurisdictions where residents were expressly legally allowed to use the service for that purpose with authorized regulated companies.

PayPal & Ebay are mega-corporate, deep-pocketed brothers. PayPal long ago blocked gambling related transactions. This doesn’t have an effect on poker, aside from that which is already regulated. Would love to see PayPal team up with some of the unregulated sites that charge US customers outrageous fees to withdraw.