By doing so, he became the fourth Russian winner of a major PokerStars event, and the first to capture a title on home soil. 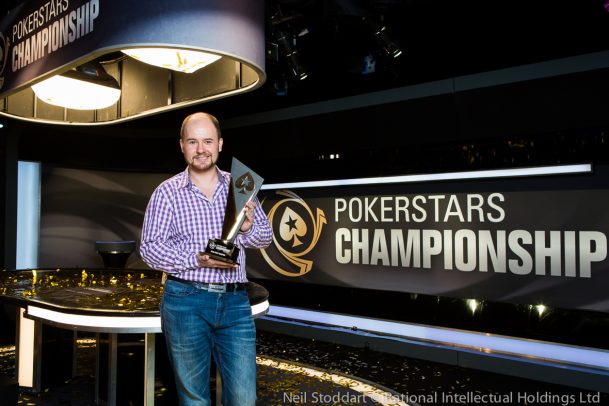 A Full House of Russians

As expected, the largest poker festival ever held in Russia field attracted primarily locals to the Sochi Casino and Resort. In fact, they made up nearly 75 percent of Main Event participants. Not surprisingly, the majority of the final table hailed from Russia, though there were two players from Kazakhstan and one from Iran.

Regarding the player from Iran, Seyed Ghavam, he finished in third place for RUB 13,335,000 ($235,949), which brought his live tournament earnings up to $309,785 and vaulted him into seventh place on his country’s all-time money list.

Likewise, both Lavrentiy Ni and Daniyar Aubakirov, the two players from Kazakhstan, got big boosts on their country’s list. The former finished in fifth place for $151,276, while the later took seventh for $86,671. With their prior winnings, that put them in fourth and third respectively on Iran’s all-time money list.

Another player that went deep was 2003 World Series of Poker champ Chris Moneymaker, who was among the final 16 returning on Day 5. Unfortunately, the Team PokerStars Pro was short and fell after shoving his last 10 big blinds under the gun with the 7♦7♣ and received a call from Aubakirov, who held the A♦10♠.

Pavel Shirshikov Eliminates All But One

Pavel Shirshikov, who plays online under the moniker “OMGinmarsat8,” proved his mettle throughout the tournament. He took the chip lead on Day 3, maintained it the following day, and ended up making the final table second in chips.

He proceeded to eliminate six of his seven opponents including well-known Russian pro Vladimir Troyanovskiy, a member of the GPL’s Moscow Wolverines.

In what would be the final hand of the tournament, which was Hand #163 of the final table, Troyanovskiy limped from the small blind and then called off for 1.1 million after Shirshikov moved all in. Shirshikov tabled the A♥6♥ and held against Troyanovskiy’s K♣7♣ after the board ran out 6♦5♥4♥5♠J♣. With that, Troyanovskiy was eliminated in second place for RUB 18,450,000 ($326,454).

It marked the 12th six-figure cash for the 43-year-old Troyanovskiy, who now has more than $5.1 million in career tournament earnings.

“I’m very happy to become the first Russian to win a poker tournament organized by PokerStars in my country,” Shirshikov told officials after his win. “I ‘ve already received a text message from my mother. She wants a Mercedes.”