The 2017 World Series of Poker (WSOP) Main Event is down to the final table of nine, but one man who won’t be seated there is 37-year-old Paul Senat. Nonetheless, he’s been making plenty of headlines, albeit probably not for anything he’d be happy about. 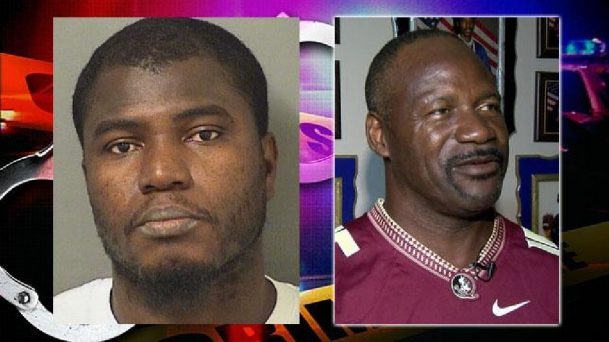 Paul Senat (left), who made a deep run in the 2017 WSOP Main Event, is charged with manslaughter in the death of Darryl Rudolph (right). (Image: PBSO | WPEC)

The Floridian, who finished 70th out of 7,221 players on Sunday for $101,444, is currently out on bail and facing manslaughter charges in the bizarre death of 55-year-old Darryl Rudolph, a handyman working in the room next door when Senat’s AK-47-style rifle allegedly accidentally discharged.

Rudolph is the father of Florida State University football star Travis Rudolph, who signed with the New York Giants as an unrestricted free agent just days after the incident at Sugar Daddy’s Adult Cabaret that ultimately led to his father’s death.

On April 25, Senat, a part-owner of the strip club, was arrested for manslaughter after he allegedly fired an AK-47 assault rifle in a back room. Senat claimed that he didn’t realize the gun had discharged. The bullet passed through a wall, striking Rudolph, who was changing the filter in the office’s air conditioning unit.

The bullet entered Rudolph’s back, severed his spine, and exited via his neck. He was taken to St. Mary’s Medical Center in West Palm Beach, where he passed away the following day.

The gun, which Senat said was used for protection, allegedly did not have the safety engaged. As such, what was originally deemed an accidental shooting was changed to manslaughter after authorities suggested Senat showed a “reckless disregard of human life.”

“In deciding to remove the rifle from the shelf, Senat pointed the muzzle of that weapon in the direction of others who were feet away, in the immediate adjoining room, and as he did so, he engaged the trigger, causing the weapon to fire, shooting and killing the victim,” reads the police report.

“The night club was open for business and crowded with patrons. The gun had a safety that was not engaged thereby making it exposed to its dangerous effects … Senat’s conduct was a grossly careless disregard of the safety and welfare of others.”

A day after the shooting, Senat posted a $35,000 bond. He was ordered by Judge Dina Keever-Agrama to have no contact with Rudolph’s family and told hat he must stay away from the club until the case is resolved. He is set to appear back in court August 16.

Whether or not he was also told to remain in Florida, considering he was out on bond, is not clear.

This was not Senat’s first brush with the long arm of the law, either. In addition to six minor traffic violations between 1997 and 2007, the Floridian, whose only prior tournament cash was six years ago for $2,753, has had three eviction filings, as well as three foreclosures, and is also shown in court records to have been involved in a prior civil domestic violence case.

This past summer, one of the games most vilified players, Chris “Jesus” Ferguson, not only participated in the WSOP, he currently sits atop the Player of the Year race. Ferguson is disliked by many for his role with Full Tilt Poker, in what authorities termed a Ponzi scheme after seizing the site (and others) in 2011.

Of course, poker has long been a game open to all, no matter their alleged past transgressions. In fact, the founder of the WSOP and a member of the Poker Hall of Fame, Benny Binion, had two murder convictions in his fairly lengthy rap sheet.