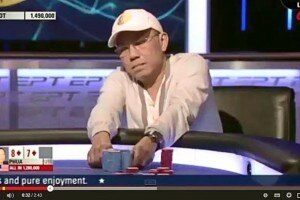 Paul Phua, who is accused of running an illegal sports betting ring in Las Vegas for the World Cup last July, convicted the same offense in Malaysia in 2004. (Image: TheStar.Com.my)

Paul Phua is currently on trial in the US for running an illegal sports betting operation in Las Vegas during the world cup.

Though the former Macau junket operator had the support of professional players like Phil Ivey, Andrew Robl and Tom Dwan during his initial arrest last year, it turns out he has been down a similar road before.

Years ago, Paul Phua was convicted of the exact same offense in Malaysia.

Independent news outlet Malaysiakini reports that Wei-seng “Paul” Phua, who is a native to Malaysia from Sarawak, was arrested in 2004.

He was allegedly running an illegal sports gambling ring centered on the European Championship soccer tournament.

For his crimes Phua had to pay a large fine where he then proceeded to leave the country soon after the conviction.

He reportedly left for Vietnam to escape any creditors or people that lost money when the gambling operation was busted.

Phua was even barred from returning to Malaysia during the 2008 World Cup.

News of Phua’s misdeeds have cause a bit of an uproar in Malaysia.

In December 2014, Ahmad Zahid Hamidi, Malaysia’s Minister of Home Affairs, revealed that Phua was helping the government on matters of national security.

While Hamidi was vague on what kind of assistance Phua was providing, he had written to the FBI saying Phua would be welcomed back to Malaysia as his services were still needed.

Hamidi also claimed that any association Phua had with Chinese organized crime was mere speculation.

However, the chief of police in Kuala Lumpur said he had warned the FBI about Phua’s possible connections to the 14k Chinese triad in 2008.

Even with political pressure and a possible police probe, Hamidi declines to comment on how Phua provides Malaysia with assistance in national security.

In June 2014, Phua and 17 other men were arrested in Hong Kong for running an illegal sports betting ring for the Brazilian World Cup matches.

13 Malaysian men were deported while the five men from China faced criminal charges.

The following month, Paul, his 23-year-old son Darren and six other men were arrested at Caesars Palace in Las Vegas.

Phua and the other men rented three luxury suites at Caesars where they set up equipment to monitor World Cup matches and establish a sports betting ring.

Eventually the staff at Caesars noticed the activity and authorities were alerted.

The computers claimed during the police bust of Phua’s operation revealed that HK$2.7 billion ($3.5 million) was taken in wagers.

Another computer record also suggested Phua’s operation had taken $13 million in rake for the illegal activities.

Phua on the Defense

Phua’s lawyers are contesting the charges and mounting a very heavy defense.

David Chesnoff, who is Phua’s attorney, denies the bribing allegations saying they were only found using illegally obtained evidence.

According to the attorneys, the FBI needed a warrant to search the hotel suites and also serve it.

If they didn’t have those, then Phua needed to give permission for the rooms to be searched.

To enter the rooms at Caesars, the FBI posed as Geek Squad technicians under the guise of fixing internet problems.

It is also believed by the FBI that Phua plays a role in IBCBet, one of the biggest sports gambling agencies in the world.

Currently, Paul and Darren are the only two defendants still awaiting trial in Las Vegas.

One man was charged with a lesser crime and deported. The other five men were charged with crimes but signed plea bargains after implicating Paul Phua.

thats big. just imagine how many more BIGGER ones there are. essentially all of these rings make up THE ring IMO

What a complete waste of FBI’s time and money. Go catch some terrorists or real criminals,not rich guys having a wager they can afford!!!!

Your so right. If your not one of the elite who have ties(and give campaign funds), then it’s against the law. Let’s see, you want to make a bet and I want to take a bet, that makes me some big criminal!