Patrik Antonius is back. The high-stakes pro who seemed like a throwback to an earlier era hadn’t made a final table since 2014, but he took down the Super High Roller event this weekend at the Partypoker Millions Germany, beating, among others, one of the hottest players currently in the game. 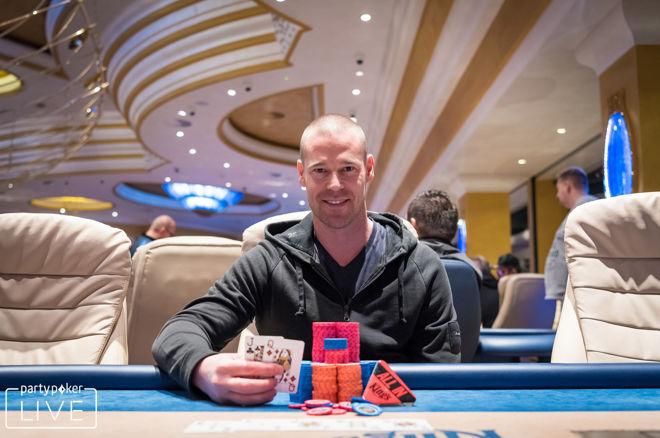 Patrik Antonius took his live tournament earnings beyond the $7 million mark with a win at the Partypoker Millions Germany series in the Czech Republic. (Image: Partypoker Live)

With the top poker players in the world converging on Feb. 9 at the King’s Casino Rozvadov in the Czech Republic (just across the border from Germany, where such events aren’t legal), Antonius was the last of 37 players to buy into the €25,000/$30,600 Super High Roller.

But unlike many of his 36 opponents, the “Flying Finn” didn’t let a world-class field faze him as he joined at the last possible opportunity.

Last In, Last Out

Despite registering after a handful of players had already hit the rail and re-entered, Antonius avoided an early exit to start the final table as a co-chip leader, wielding the same 14 million chip stack that German phenom Stefan Schillhabel held.

Whether it was a matter of strategy or just how the cards fell, Antonius bided his time as the others fought for position.

Eventually, after Schillhabel eliminated Manig Loeser to burst the bubble, it was time for the remaining seven players to concentrate on the title. As chips started to fly, Dominik Nitsche, Dietrich Fast and Steve O’Dwyer all fell by the wayside as Schillhabel extended his lead.

The German would begin to lose chips, and his run would soon be brought to a halt though when he pushed all-in with pocket 7s, only to have Partypoker ambassador Joao Simao quickly call with A♥10♥. After a flop of J♣10♣9♦, Schillhabel had six outs, but two blanks on the river sent the former chip leader out the door.

Amid the carnage around him, Antonius managed to maintain a healthy stack, and it was this patience that eventually led to a title-winning run. After taking a hit, the Finn eliminated German Renato Nowak in third place before taking control of the action.

Using his years of experience in the biggest games around, Antonius kept his cool and struck the final deadly blow with Q♦J♣. With the less experienced Simao desperate to find a way back into contention, pocket kings looked to be a gift from the poker gods.

However, after taking an aggressive line from start to finish, the 3♠A♦J♥10♣K♦, the Brazilian had to settle for second place after Antonius revealed his straight.

Although he came up short, partypoker’s representative banked the largest payday of his career and went on to parlay that into a fourth place in the second Super High Roller of the festival just 24 hours later.

As for Antonius, he banked another live tournament trophy to go along with his 2005 European Poker Tour (EPT) Baden title before heading off to take part in Partypoker’s televised cash play in “The Big Game.”

Flying Finn LILO nice price this $520,430 keep going you are the best Defensive player I hope you get more winnings for 2018

Wow, this is awesome hearing. Good to see one of the old crowd bag a title like this. Gz to Joao Simao finishing up there as well. He’s such an amazing player I feel.