Patrick Mahoney Claims SHRPO Top Prize for Over Half a Million

Minnesotan Patrick Mahoney took 1st place on Wednesday in the Seminole Hard Rock ‘N’ Roll Poker Open (SHRPO) in Hollywood, Florida for $564,227. It was the first major tournament title in his poker career. He also earned an automatic entry into the $5,200 buy-in SHRPO slated for August. 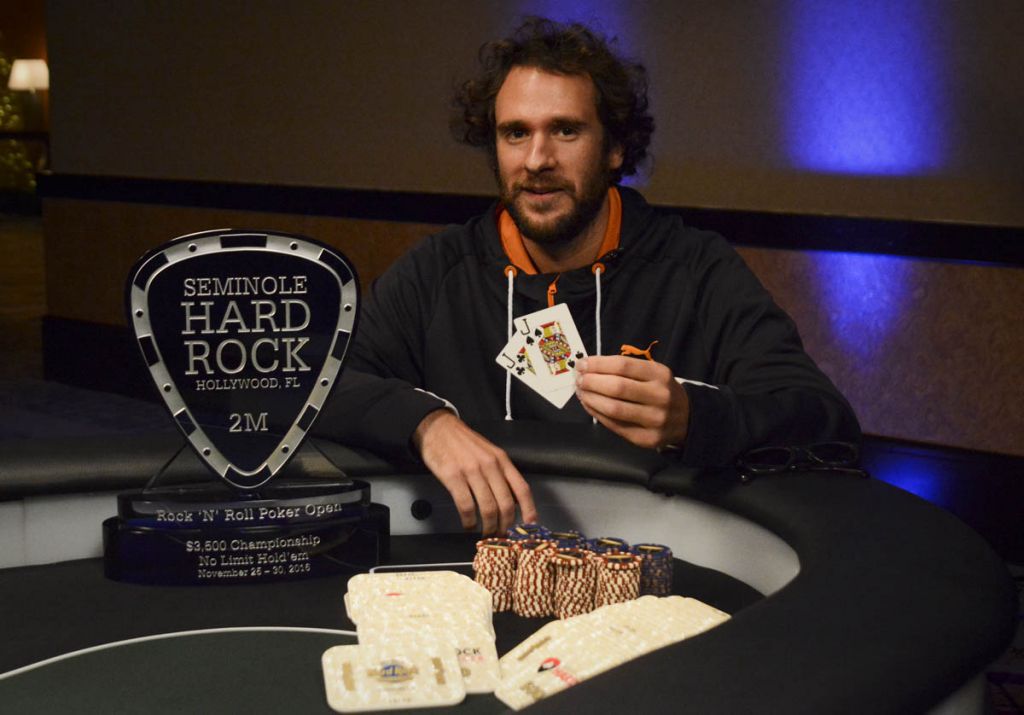 The tournament began November 25 with 760 players. Five days later, Mahoney was the last man standing. He beat out an impressive field, including three WSOP Main Event champions (Ryan Riess, Joe McKeehen, and this year’s Qui Nguyen), along with 2016 WSOP Player of the Year Jason Mercier, his bride Natasha Mercier, Matt Glantz, Jessica Dawley, and a host of other talented players.

One of those “other” talented players included Upeshka De Silva, the overwhelming chip leader with 18 players left and second in chips when the final table of six began. De Silva got off to a great start at the final table, moving into the chip lead early on after winning a huge pot against the previous chip leader Matt Humphrey.

He continued his climb. After William Jennings was eliminated in 6th place ($109,440), De Silva had half the chips in play. Billy Pilossoph then busted Mark Dube in 5th place ($133,760). But then Humphrey sent Pilossoph to the exits soon after in 4th place ($165,576) when Pilossoph ran into pocket kings.

Mahoney and De Silva then traded jabs. Humphrey followed by taking a swing at De Silva to take over the chip lead. That’s when things went downhill for him. In a hand against Mahoney, De Silva ran into a jack-high flush on the river, and called off all his chips with just top pair. He was eliminated in 3rd place for $200,640.

That left Mahoney and Humphrey heads-up for the title. Mahoney held better than a 2-1 chip advantage. After winning a big pot right off the bat, Humphrey was right back in it. But he eventually lost a race to finish runner-up for $328,320. Patrick Mahoney is the champion.

The tournament was streamed live online. Poker fans can watch the final table on CBS Sports Network’s “Poker Night in America” at a later date to be announced.

There are some exciting poker events on the horizon this month. But none bigger than one in Las Vegas at Bellagio.

On December 5, the $10,400 buy-in WPT Five Diamond World Poker Classic begins. Many of the best players in the world will be in town for this one. Kevin Eyster is the reigning champion, having won $1,587,382 last year. Jake Schwartz and Cate Hall each made the final table.

Sounds like this was an exciting final table. Minnesota has a nice card club called Running Aces if you are ever up that way.