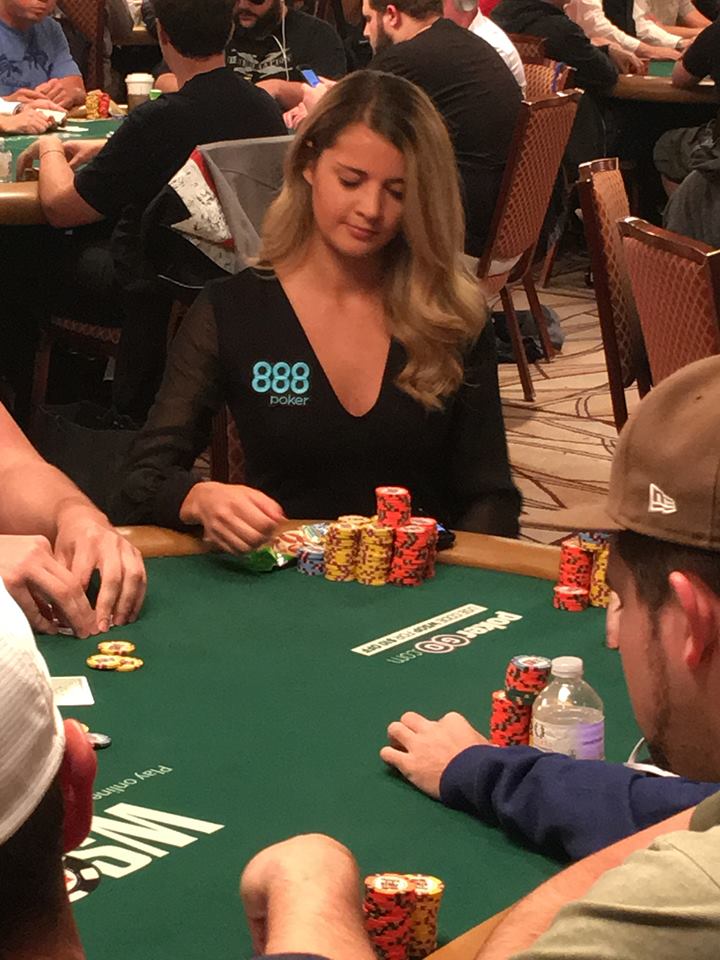 888poker Ambassador Sofia Lövgren will return for Day 4 of the WSOP 2017 Main Event with a healthy 996,000 chips. (Image: CardsChat exclusive)

In addition to Day 3 of the $10,000 buy-in Main Event, the 2017 World Series of Poker (WSOP) offered its last starting flight for a gold bracelet event on Thursday.

The Main, which began with 7,221 players, played down to the money, which guaranteed the survivors a $15,000 payday. Meanwhile, the Little One for One Drop raised nearly half a million for charity.

The night ended with players making the money, which meant one of them had to leave empty-handed. That ended up being Quan Zhou, who earned an entry into the 2018 WSOP Main Event as his consolation prize for hitting the money bubble.

In that last hand, three-time bracelet winner Kitai raised to 14,000 under the gun and Zhou, who won the PokerStars Championship Macau Single-Day High Roller back in April, three-bet to 32,000. Action folded back to Kitai, who held the K♦K♠. He just called to see a 10♦J♣10♥ flop.

Not everyone was fortunate enough to make the money. Among those to meet their (non-money) maker on Day 3 were Brian Rast, Mike Matusow, Shack Shine franchisee Matt Jarvis, Jason Mercier, and Doug Polk. Likewise, former champs Joe Hachem, Greg Raymer, Johnny Chan, and Tom McEvoy all hit the rail on Thursday.

Among those to fall were Ari Engel, Will Kassouf, Ryan Laplante, Bryn Kenney, and Johnny Lodden. On Friday, the surviving 784 players from all three flights will return at 2 pm PT to play ten more levels. The minimum payday is worth $1,500 while the winner will walk away with $528,316.