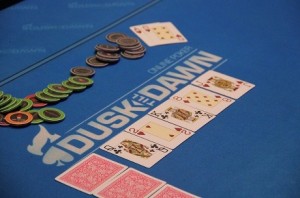 The WPT500 at Dusk Till Dawn will be the first major poker tournament to be played in the UK after the introduction of several new regulatory laws. (Image: uk.pokernews.com)

History will be made in just a few days at the partypoker-sponsored World Poker Tour stop, dubbed the WPT500 at Dusk Till Dawn tournament series. The reason the event will be historical is because it will be the first major tournament series conducted under the new regulatory laws in the United Kingdom. The laws recently were activated and represent a new era in the country.

The event is just a few days away, as the WPT500 event is at the Dusk Till Dawn Casino in Nottingham and starts on November 9. Many of the satellites at the casino to the Main Event started taking place as early as a week before the start date and players also had the chance to win their way in playing online going all the way back to August.

The series is officially sponsored by partypoker and is a sanctioned World Poker Tour event. The “Dusk Till Dawn” is taken from the venue’s name, and the 500 is a reference to the £500 (approximately $800 US dollars) buy-in of the main event.

One of the biggest reasons this tournament has made headlines is that for the relatively low buy-in amount, there is a huge guarantee of £1 million (approximately $1.6 million USD). The Main Event allows for one re-entry, and players start with 30,000 in tournament chips.

The format is a little atypical, as Day 1G is a special turbo heat day, meaning that the blinds go up rather quickly on that particular day of play. The remaining days of the Main Event are played with a normal blind stricture. For those who don’t run well, there is a £100,000 WPT500 Second Chance event that kicks off on Saturday, November 15.

Poker icon Mike Sexton, who has long been a spokesperson for partypoker and is synonymous with the World Poker Tour, is expected to make a special appearance for the start of the event. While it won’t be televised, Sexton is coming out regardless to show his support of poker in the UK. Another person of note that should turn up is Carl “The Cobra” Froch, who is a well-known four-time world boxing champion. He happens to be one of the few British boxers able to capture multiple titles during the last few years.

While the new laws in the United Kingdom are not expected to have a deep impact on live poker, they are expected to greatly impact online games. Since this tour stop is heavily attended by online qualifiers, it will be telling if the attendance increases, remains the same, or decreases as a result.

Over the last year, there has been widespread amendments and updates to laws governing taxation and related matters for gambling in the United Kingdom. The UK Gambling Commission enacted the laws recently, with the WPT500 event in Nottingham being the first event to exist post-launch.

The Dusk Till Dawn Poker & Casino in Nottingham offers 45 poker tables which allows 450 grinders to come and battle it out. There are a wide variety of cash games often being run, including Hold’em, Omaha, and Dealer’s Choice games. The venue often runs tournaments, making it one of the hottest poker spots in the area.