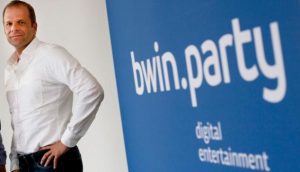 It’s been a tough year for partypoker and its parent, bwin.party and its CEO Norbert Teufelberger. (Image: sbcnews.co.uk)

partypoker has hit a new two-year low for cash-game traffic, according to multiple industry sources. The site, owned by bwin.party and traded on the London Exchange, has not recovered its traffic now that the summer is over, despite many competitors already showing a recovery. The downturn continues amidst senior-level turmoil and changes in software that came a year ago aimed at improving the player experience.

According to industry watchdog site PokerScout.com, partypoker is the fifth-most visited site for cash games in the world, trailing PokerStars, 888poker, iPoker, and PokerStars.it (Italy). On a typical weekend, partypoker currently gets approximately 7,500 overall players, with about 2,000 players sitting at cash game tables. The 24-hour peak at the site is 2,657 players and the current 7-day average is approximately 1,500 players.

Looking at the 6-month network trend, the graph is certainly troubling. Concurrency numbers continue to decline, having started at about 2,000 players six months ago. Now, the line trends downward in consistent fashion, currently sitting at the aforementioned 1,500 player mark.

By contrast, the iPoker Network (owned by Playtech), was slightly above the 2,000 player mark six months ago. The graph swings downward from there but held steady below the 2,000 player mark through the early summer months. Now, the graph swings back upwards past the original threshold, clearly demonstrating traffic recovery, something that partypoker is not enjoying.

Trying to Stay Ahead Hasn’t Paid Off

It has been a year since partypoker totally overhauled its software client. While it’s now aligned with the rest of the industry in terms of design and user interface, many believe that it was simply too little, too late. Others have pointed to partypoker’s strong investment into social features, missions, and achievements, which still are taking hold with the player pool. Many believe that once these new features take root, they’ll become the bedrock for player interaction and retention for the site.

An issue that partypoker has faced is keeping up with the competition for certain game types. When Full Tilt Poker came out with Rush Poker, many sites followed in their footsteps and now “fast fold” games can be found an almost all sites. partyoker, by contrast, was a step behind the competition coming out with their version of a fast fold game. In addition, the Expresso-style lottery sit-n-go games that were introduced by Winamax and copied by Full Tilt and iPoker have yet to make any appearance on partypoker.

Distracted by US Market?

The leadership at partypoker has already admitted their attempts to take root in the United States market has not been as successful as they had hoped. The team bet big on the legalized markets in the US, leading the way in New Jersey. However, the overall market has not been up to expectations, meaning partypoker has had to work more than expected to help grow the new market.

The good news for investors is that the stock price for bwin.party Digital Entertainment has done very well in the month of September. Two years ago, the stock was trading at around $170, but has seen a decline since then, with intervals of recovery. The stock appeared to bottom out in late August, when it hit $80.60 a share, but as of close on the London Exchange on September 12, the stock had soared back up to approximately $99 a share. That being said, the stock still hasn’t recovered value from its place a year ago, when it was trading for $113.