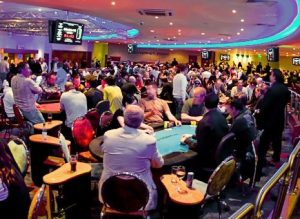 Poker tours are often sponsored by online poker companies, which lend their names, branding, and ability to run online satellites to help raise the profile of live events.

But partypoker is taking things a bit further than that with the Grand Prix Poker Tour in the UK, one that actually incorporates the online poker room into the tour itself.

The basics of the tour will be pretty appealing to players in the UK who are looking for an affordable alternative to more expensive tournaments.

To build those big prize pools, events will be featuring multiple starting days.

However, if players compete in one starting flight and wish to enter into later ones, they will have to forfeit their stacks, meaning this is not a best stack forward format.

Series Kicks Off at Dusk Till Dawn

The first event on the tour will take place at the famous Dusk Till Dawn poker room in Nottingham on October 17 and 18.

So far, this may sound like a fairly standard low-stakes poker tour. However, the integration of partypoker into the tour format may offer players something of a unique experience in a variety of ways.

First, of the 12 events scheduled for the first edition of the tour, four of them are online events at partypoker.

Other tournaments are scheduled for some of the UK’s most famous soccer venues: Stamford Bridge, Old Trafford, and Amex Stadium are all a part of the tour.

Because of these non-casino locations, all of the financial transactions related to the tournaments are taking place through players’ partypoker accounts.

That means that players must sign up for tournaments by paying cash or an appropriate tournament ticket in the Partypoker software, and all winnings will also be credited to their accounts.

However, the online portion of the tour also offers lots of flexibility thanks to Players Choice starting flights that are available on partypoker.

These Players Choice tournaments act as a Day 1 flight for any event on the Grand Prix Poker Tour.

If a player finishes one of these events with a stack, they have the right to take that stack to play Day 2 of any live event on the tour over the course of the next year.

Each tournament features the same blind structure as the WPT, only with shorter level lengths: 30 minutes for live events, 12 minutes for the online tournaments.

In addition, players who do well on the Grand Prix tour will have a shot at playing on the WPT. The top 30 players on tour will earn a seat into the 2016 WPT UK Main Event, while everyone else in the top 100 will be awarded a seat into a 2016 WPT500 event.